CHATTANOOGA (WDEF) – It’s been 2 ½ years since Officer Nicholas Galinger was killed on Hamill Road. . But on Saturday after more than 14 hours of deliberation the jury announced that Janet Hinds has been found guilty.

“A long time ago I said someday Janet Hinds is going to have to face what she did and today is that day,” says Barry Galinger, Nicholas’s Dad.

Over the last six days, the Jury heard from both the state and the defense about what happened on February 23rd, 2019 that cost 38-year-old Police Officer Nicholas Galinger his life.

“Nicholas Galinger was a Chattanooga Police Officer. I met him on one of the first days of his academy. He had a promising career that ended much too soon,” says Eric Tucker, Interim Cheif of Police for Chattanooga Police.

After 15 hours of deliberations, two anxiously awaiting families were told the jury had reached a verdict.

The jury announced Janet Hinds was found guilty on 8 of the 10 charges she faced.

Hinds was found guilty of vehicular homicide by Intoxication, reckless driving, leaving the scene of an accident resulting in death, failing to report an accident, speeding, failure of due care, failure to maintain a lane, and driving under the influence.

“The B felony she’s convicted of carries 8-12 years in prison. The remainder of the convictions is for misdemeanors so the most you can get out of that is 29 days. So she’s looking at 8-12 years on Vehicular Homicide by intoxication, says Pinkston.

Hinds’ head fell as she was made aware of her fate. Emotions flowed from both sides as reality set in.

“A long time ago it got easier as time went by. I don’t think it does. I go to bed thinking of him. I dream of him and I wake up with him in my mind every morning. I just wish I wasn’t standing here right now. It’s a tragedy for both families,” says Galinger.

Defense attorney Ben McGowan declined to comment after the trial stating he had a lot to process.

Hinds was taken into custody until the conditions of her bond are met and confirmed.

Hinds will be placed on house arrest until she is sentenced on November 1st.

Janet Hinds was charged with the hit and run of Chattanooga Police Officer Nicholas Galinger.

On a rainy night in February 2019, the officer was out of his car checking out an overflowing manhole on Hamill Road in Hixson.

Prosecutors claimed Hinds was drunk when she hit him with her car and then drove home without rendering assistance.

She never came forward, even after Officer Galinger’s death was all over the news.

Several days later, investigators spotted her vehicle in her driveway with front-end damage they were looking for. 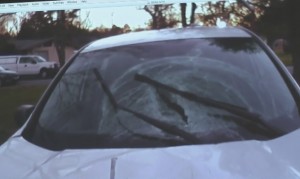 The evidence included a video of her drinking at the Farm To Fork restaurant in Ringgold. 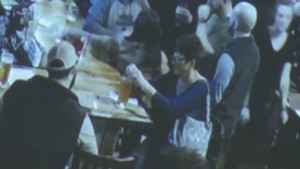 Janet Hinds at Farm to Fork

They also presented evidence that she was traveling at least 10 miles over the speed limit at the time.

The Defense did not dispute that Hinds hit Galinger.

She claimed she hit a deer and did not know it was a person.

Her attorneys also disputed that she was too drunk to drive.

Instead, they blame the city for the poor lighting and road conditions on Hamill Road as well as Chattanooga Police for not training their officers properly.

The jury was made up of 11 women and five men who were picked in Davidson County and brought here for the trial.

The case took two years to come to trial because of backups in the court system caused by the pandemic.