The statement says that Jeff Styles first encountered the victim on Highway 111 shortly after 4pm on Friday, June 15th.

It goes on to say this was several miles from the site where the victim shot Styles.

According to Styles’ lawyer, the incident started after Styles passed a slow moving tractor trailer. He says at that time, Styles say a car drove up behind him at an excessive speed.

He says the two drivers exchange some hand signals before the victim drove dangerously close to Styles’ car.

Styles says at one point the victim brandished a handgun and then eventually Styles sped up in an attempt to get away.

He says he was chased several miles before Styles says he felt the need to jump out of his vehicle with his military-grade tomahawk. That’s when he says the shooting occured.

He says that’s when the victim fled the scene at a high rate of speed.

Styles and his lawyer are encouraging anyone who witnessed any of this to reach out to police.

While being interviewed by police at the hospital, Styles never said that he “blacked out” before, during,or after this incident.

Styles “attributes this error to an interview conducted while he was being administered morphine for his gun shot wound. The Chattanooga Police Department public information officer who released that statement was mistaken.”

You can read the full statement here: 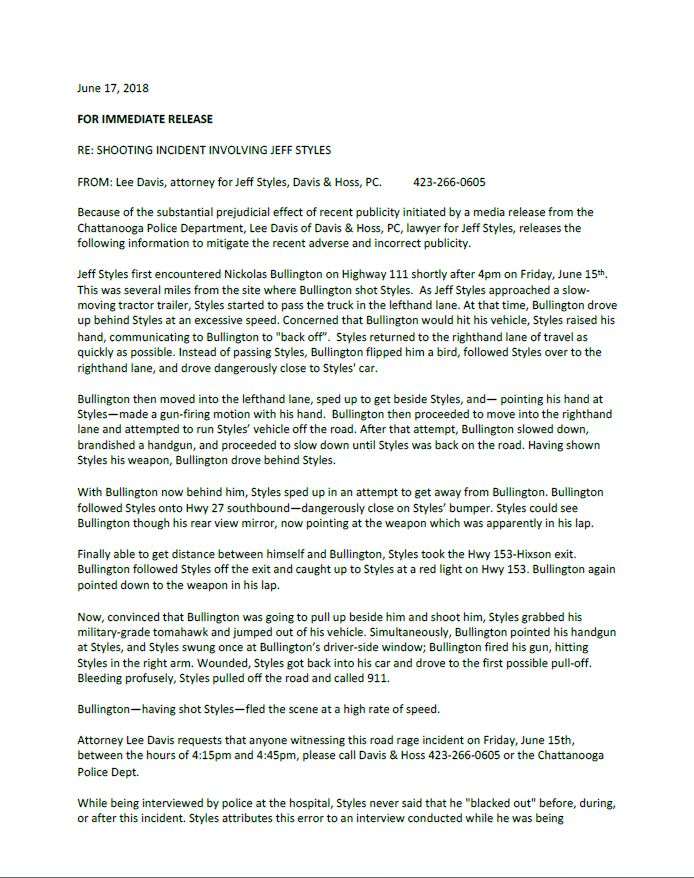