Joe Jonas and Sophie Turner just got married in Vegas

After being forced to marry Joffrey Baratheon, Ramsay Bolton and Tyrion Lannister, Sansa Stark could definitely use a break in the husband category – and it appears she just got one in the form of a Jonas brother. “Game of Thrones” star Sophie Turner and Joe Jonas shocked fans by apparently getting married Wednesday night in Las Vegas, just hours after the Billboard Music Awards, inside a Little White Wedding Chapel at Chapel L’Amour.

The surprise nuptials were chronicled on Diplo’s Instagram live feed, as the award-winning DJ appeared to provide his services for the after party. In fact, Diplo’s set was the only mention of the star-studded wedding to make it onto the groom’s social media. So, JoBros fans hungry for details had to head to Diplo’s account instead.

There, Turner can be seen walking down the aisle in a white satin pantsuit as country music duio Dan + Shay perform a live rendition of their chart-topping hit, “Speechless.” In signature Vegas fashion, there is an Elvis impersonator at the front of the chapel. Joe Jonas can be seen looking back at his bride, next to both of his bandmate brothers in matching gray suits.

Nearly everyone in attendance has their phones out, recording videos of the event, though other footage of the ceremony has been slow to leak out. And other music stars, like Khalid, can be seen in the periphery of Diplo’s Instagram Stories. 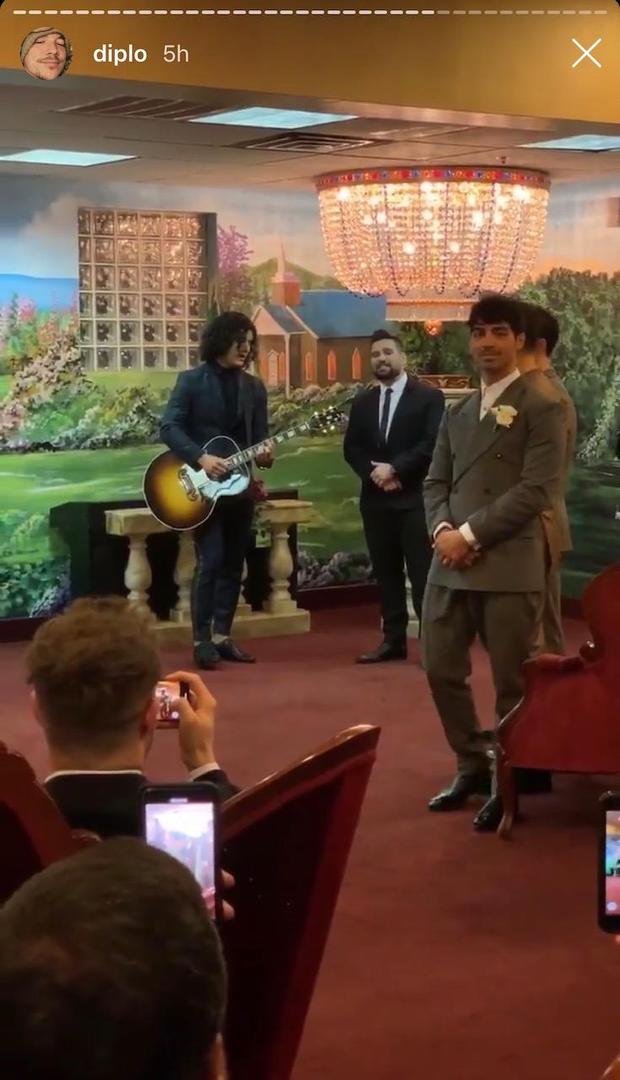 “I promise you, I will never leave you. I will love and trust you, all the days of my life,” the couple told each other, exchanging vows before their gathered friends and loved ones. “In sickness and in health… forever and ever.”

They then exchanged ring pops in lieu of wedding bands – because who isn’t a “sucker” for a detail like that?

And with that, just hours after the Jonas Brothers announced a North American tour and performed at their first award show together in a decade, the last unmarried Jonas Brother was officially taken off the market… and in a low-key manner that fans were quick to note was the “Stark” opposite of Nick and Priyanka’s lavish wedding celebration last year.

Joe and Sophie getting married by an Elvis impersonator in Vegas really outdid all 64 of nicks weddings.

Joe and Sophie really out did Nick and Priyanka’s 6 wedding receptions by getting married in Vegas by an Elvis impersonator in front of random people from the music industry after the #BBMAs pic.twitter.com/k2ZBscZVsP

So, fans dreaming of marrying one of the Disney Channel heartthrobs will now have to set their sights on the “bonus Jonas,” Frankie. Joe has officially gone from “Cake By The Ocean” to wedding cake with his wife.