Joel Sartore on wild cats: Felines that lurk in the shadows

Here’s National Geographic photographer Joel Sartore on felines that lurk in the shadows:

Years ago, in the Bolivian Amazon, a jaguar came so close to my photographer’s blind I could hear her breathing.

But she didn’t make a sound with her feet; not one leaf crunched or twig snapped. As an ambush hunter, she must be either completely silent or starve to death.

She vanished into the foliage as if walking on air.

Now, if a bright-orange, 150-lb. jaguar can be that stealthy, imagine what a small wild cat is capable of.

Some call them Shadow Cats, and there are 31 species around the world, ranging in size from the Iberian lynx to the three-pound flat-headed cat.

There’s the characal, the margay, and the clouded leopard. Never heard of ’em? Few of us have, and yet they’re all around us.

Examples of wild cats: The characal, the margay and the clouded leopard.

If you hike or camp, it’s likely you’ve been watched by one without ever knowing it.

In North America, it could have been a panther. In South America, perhaps an oncilla.

They’ve been there for eons, in the mountains, in rain forests, marshes and deserts. But twenty five years in the field and I’ve never seen one with my own eyes. Never! Instead, I’ve had to use camera traps, unmanned motion detectors, just to get these few images from the wild. 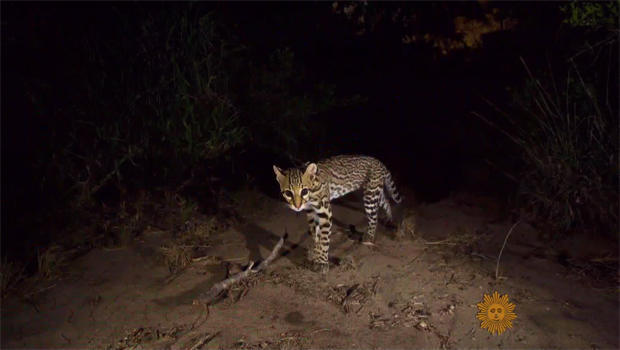 Each species is a masterpiece of natural camouflage. The spotted pattern on an ocelot allows it to melt into the brush, while a Pallas’s cat blends in perfectly with the rocks of its Himalayan home. It’s no wonder so little is known about them.

Take the marbled cat: just what is that huge tail for? Only one cat, one, has been studied in the wild so far, and researchers think the tail may be used for balance on night patrols, high up in the forest. Oh, and it can turn its hind feet around 180 degrees backward, just like a squirrel, to walk straight down trees.

But while these shadow cats are exotic, the faces are familiar. Your house cat could be a descendant of an African wildcat, and curled up on your lap, it’s every bit as amazing as all the rest.

That purring you hear isn’t random; it’s evolved over millions of years and is thought to heal bones and muscles, not to mention relax their owners.

And did you know that your pet is one of the few domestic animals that can return to the wild and actually thrive there? Best to keep that kitty inside, though; cats are efficient predators, and can kill native wildlife, including songbirds.

After years of studying small cats for National Geographic, though, I’ve come to just one conclusion: they’re simply beautiful – from the jaguarondi and the jungle cat, to the serval and the bobcat.

So, next time you take a hike, think about these shadow cats, and look around carefully.

It won’t do you a bit of good, though!