Fifty years after John Lennon and Yoko Ono famously staged a honeymoon “bed-in” for peace in an Amsterdam hotel, a Dutchman has unearthed 30 minutes of color footage of the event from his cellar. The couple spent a week mostly under the sheets at the Hilton hotel to spread a pacifist message — smoking, eating, singing and playing guitar while receiving journalists for interviews.

“We’re going to stay in bed for seven days, sort of instead of having a private honeymoon, it’s a private protest,” Lennon told a reporter. Ono added, “For the violence that’s going in the world, you see. We show that instead of making war, let’s stay in bed.”

The European leg of their honeymoon, which included an unusual press conference in Vienna with the glamourous pair obscured inside a giant “bag,” was a huge media event — each step captured by photographers and videographers. Among the press was a Dutch team shooting footage for a two-part, 84-minute documentary, a kind of video diary filmed at the pair’s request.

Beatles member John Lennon and his wife Yoko Ono receive journalists March 25, 1969, in the bedroom of their Hilton hotel suite in Amsterdam during their honeymoon in Europe. AFP/Getty Images

It was broadcast only once, shortly after the honeymoon, and shown at the Edinburgh Film Festival the same year before disappearing into the archives of broadcaster KRO, where Jan Hovers was employed in the 1980s. During a major cleanup of used film reels, he stumbled upon a tin marked “Mr & Mrs Lennon’s Honeymoon” among others earmarked for the rubbish heap.

“I asked if I could keep it and they said: ‘No problem, it will all be destroyed anyway,'” Hovers told the Nieuwsuur current affairs program broadcast Sunday. He said he watched the footage with great pleasure, but then “forgot about it.”

“I never thought it could be unique material. I thought it was a copy. There was no internet of course, so one could not check.”

As Amsterdam marks the 50th anniversary of the unusual honeymoon, a former colleague remembered that Hovers had once mentioned the find to him. The colleague “knocked on the door and said: ‘Didn’t you have a film of John and Yoko from the time?’ Only then did I fetch it from the cellar,” Hovers said.

Lennon, co-founder, singer, and songwriter for the Beatles, married Ono in Gibraltar in 1969. He was shot dead in New York in 1980.

Beatles biographer Mark Lewinsohn told Nieuwsuur he had no idea the footage existed until now and described it as “very special.” He said, “It’s a great addition to the archive… It’s another half-an-hour of film of John Lennon and Yoko Ono that will tell us things that will make us more informed and better appreciate what they did.”

The footage, parts of it broadcast by Nieuwsuur, shows the couple in long, white pajamas in their bed on different days, with two large posters reading “Hair Peace” and “Bed Peace” sellotaped to the hotel window behind them. In one part, Lennon is sitting in bed playing guitar as Ono looks on, in another they are eating, and in a third the pair is seen from the back, sitting up in the bed as they switch off the light to go to sleep. 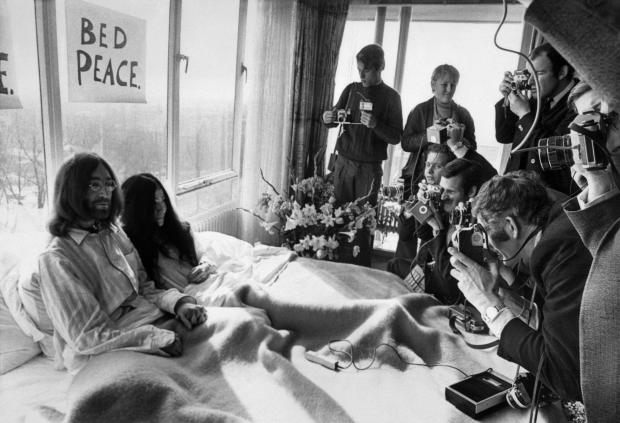 Beatles member John Lennon and his wife Yoko Ono receive journalists in their bedroom at the Hilton hotel in Amsterdam during their honeymoon in Europe March 25, 1969. AFP/Getty Images

After their Amsterdam sojourn, the couple flew to Vienna for a press conference where they spoke to reporters from within a large bag. Footage of their journey to the Austrian capital is on the tape, including some of the press scrums the pair were constantly confronted with.

“We’re serious about the peace bit you know,” Lennon is heard saying toward the end of the program. “If we make people laugh, that’s enough, you know.” 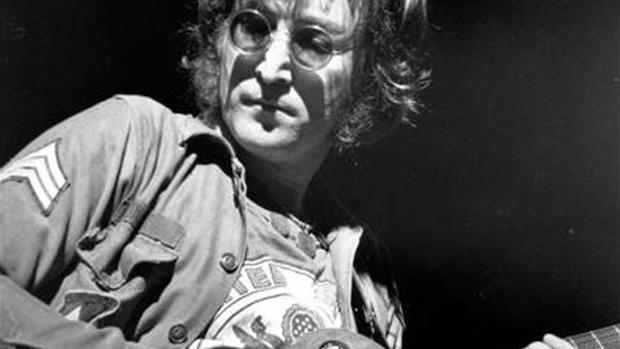