An Ethiopian Airlines plane that crashed shortly after takeoff Sunday morning was a Boeing 737 Max 8, the same model operated by Lion Air that crashed off Indonesia in October 2018.

While it is too early to know what caused the Ethiopian Airlines crash, the fact that both planes crashed shortly after takeoff is among the things raising questions about the safety of the 737 Max 8.

Ethiopian Airlines grounded its fleet of Max 8s Monday, saying, “Although we don’t yet know the cause of the accident, we had to decide to ground the particular fleet as (an) extra safety precaution.”

China did the same, at 9 a.m. Beijing time (9 p.m. EDT), for at least nine hours, and said it would consult with the U.S. Federal Aviation Administration and Boeing during that time. Eight Chinese nationals were on the plane that went down Sunday.

Cayman Airways said Monday it was temporarily grounding both the 737 Max 8s it operates.

Here are some answers to questions about the plane and what happened in both crashes.

The Boeing 737 Max 8 is a narrow-body passenger aircraft that was launched by Boeing to counter rival Airbus’ best-selling A320. For Boeing the main feature of the 737 Max 8 was that the larger engines would require less fuel, thus increasing savings.

How long have they been in the air?

How many are there in fleets around the world?

Boeing says it has delivered roughly 350 737 Max airplanes worldwide. The company says it has taken more than 5,000 total orders for the latest generation of 737s.

Do U.S. airlines fly them?

In the U.S., there are at least 69 737 Max aircraft in service across Southwest Airlines, American Airlines and United Airlines. As of Dec. 31, Southwest Airlines had 31 Max 8 aircraft, and American had 24. United said Sunday it has 14 Max 9 planes, which is a larger version of the same aircraft. Other major carriers around the world include Aerolíneas Argentinas, Air China, Icelandair and LOT Polish Airlines.

How do I know if I’m flying on one?

Most airlines inform passengers of the type of aircraft when booking a flight online or over the phone. Websites like SeatGuru can show the type of plane model for a specific flight. According to The Points Guy, American Airlines’ Max 8 planes have row numbering systems that differ from traditional 737s.

A shot of Boeing’s 737 Max 8 airplanes from the company’s website.  Eric Greer/Boeing

I keep hearing about “MCAS.” What is MCAS?

The Max is outfitted with bigger, more fuel-efficient engines than earlier 737s, a change that shifted the center of gravity forward and increases the potential for the nose to pitch up after take-off. Boeing created software known as the Maneuvering Characteristics Augmentation System, or MCAS, to counteract this risk.

MCAS uses sensors to point the nose of the plane down if it detects it has pitched too high and could be at risk of stalling. By measuring the position of the plane’s wings relative to airflow, the system’s sensor indicate to pilots if the plane is at risk of stalling from going too slow or flying too steeply into a climb. It’s a brand new system on 737 Max planes.

However, problems can arise when the MCAS system automatically pushes the plane’s nose down, potentially surprising pilots who are unfamiliar with the system and overriding their commands. According to The New York Times, Boeing and the FAA decided pilots did not need to be informed about the change to the flight control system. The Times reported Boeing and regulators decided against informing pilots at least in part to minimize the costs of retraining pilots.

What happened in the Lion Air crash?

Lion Air Flight 610 crashed 12 minutes after taking off from Jakarta on Oct. 29, 2018. The pilots immediately had trouble controlling the pitch of the plane once it was in the air. A preliminary report by Indonesian investigators concluded the pilots repeatedly struggled to raise the nose of the plane during the short flight, at one point telling air traffic control they were flying manually and were unable to determine their altitude.

Authorities haven’t settled on a final cause for the crash, but investigators discovered the sensor used to trigger the MCAS was replaced the day before the crash after experiencing problems on the four flights preceding the deadly crash.

After the crash, Boeing and the FAA indicated that the plane’s MCAS system may have triggered the anti-stall system and overrode the pilots’ manual controls, thus pitching the plane’s nose downward. Boeing told The New York Times the pilots of Lion Air might have had the chance to steady the plane had they followed previously established emergency procedures used to control 737s in similar situations.

What happened in the Ethiopian Airlines crash?

Ethiopian Airlines Flight 302 took off from Addis Ababa, Ethiopia, Sunday morning, bound for Nairobi, Kenya. There were no irregular weather patterns and visibility was clear, according to flight data from FlightRadar24. But once in the air, the flight’s vertical speed was unstable. The pilot sent out a distress call and was given clearance to return to the airport, but air traffic controllers lost contact with the plane and it crashed about six minutes after takeoff, the airline’s chief executive said Sunday.

The plane went down 35 miles outside of Addis Ababa, and all 149 passengers and eight crew members were killed. Not much more is known about the cause of the crash. 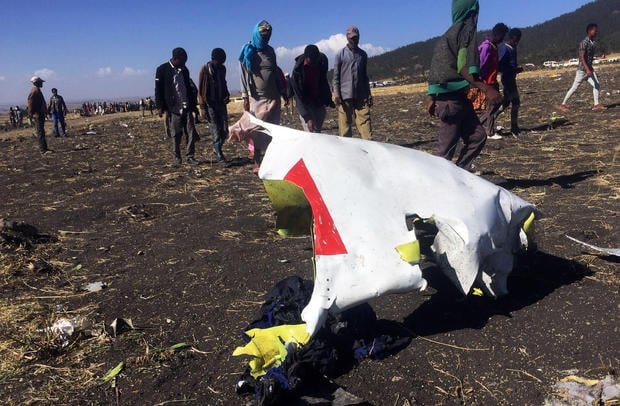 People walk past a part of the wreckage at the scene of the Ethiopian Airlines Flight ET 302 plane crash, near the town of Bishoftu, southeast of Addis Ababa, Ethiopia, on Sun., March 10, 2019. Reuters

While Lion Air Flight 610 and Ethiopian Airlines Flight 302 were both Boeing 737 Max 8s, thus far the only known similarity between the two crashes is that both plummeted shortly after takeoff. The similarities may only be a coincidence.

Boeing said Sunday it is prepared to provide technical assistance at the request of the US National Transportation Safety Board. The Federal Aviation Authority will be conducting an investigation into the cause of the crash as well.

What has Boeing said about the safety of the Max 8?

On Sunday, Boeing said it was sending a technical team to Ethiopia to assist in the investigation, and offered condolences to those killed in the crash.

After the Lion Air crash in October, Boeing and the FAA issued a bulletin to 737 Max 8 and 9 operators warning the anti-stall sensor could produce “erroneous indications” causing the plane’s nose to dive. The directive said if the anti-stall sensor is triggered then the plane could face potential nose-dives, cause pilots to have “difficulty controlling the plane” and lead to “possible impact with terrain.”

But Boeing has insisted that existing protocols are sufficient for dealing with MCAS malfunctions. Despite that assurance, the company is working on a software update to the Max to address lessons learned from the Lion Air crash.