It was “last call” for a 150-year-old pub when a developer wanted announced plans to convert it into apartments – then the community took action, as Roxana Saberi explains:

In the village of South Stoke, outside Bath, the Packhorse pub has served the community for 150 years.

Brian Perkins and the pub go way back – he was born there, 87 years ago. “That’s right. In the room upstairs above the lounge here,” he told Saberi.

But six years ago, he and the town got some bad news – the pub was going to be closed. “Well, I was disappointed, obviously,” Pekins said. “I didn’t think in my lifetime I’d see it open again. We thought, ‘Well, that’s it. That’s the end of the line.'”

For more and more pubs across Britain, it’s last call.

The life of a neighborhood pub.

He says there’s a lot at stake here: “I think pubs are an essential factor of British life. I think it defines what being British is, to some extent.”

He welcomed Saberi to the George Inn, in South London. “The building we’re in now was built in 1677, which is pretty impressive,” he said.

For centuries, pubs have been a place to mingle  … to read a book … and these days, to take the kids.

“The British have a famous reserve when it comes to being sociable,” Brown said. “And everything about the pub is micro-engineered to break down those social barriers and to enable people to talk to each other.”

Roxy Beaujolais has presided over her pub, the Seven Stars in London, for 20 years.

“Inn-keeping is a nurturing career,” she explained. “Cooking and providing vittles and drink for people of good quality is, you know, a great pleasure. It’s a great pleasure if they appreciate it!”

And her regulars do.

When asked what he likes about the Seven Stars, Owen replied, “Well, it hasn’t changed!”

To this brew add real estate.  Pub buildings are getting carved up into apartments. 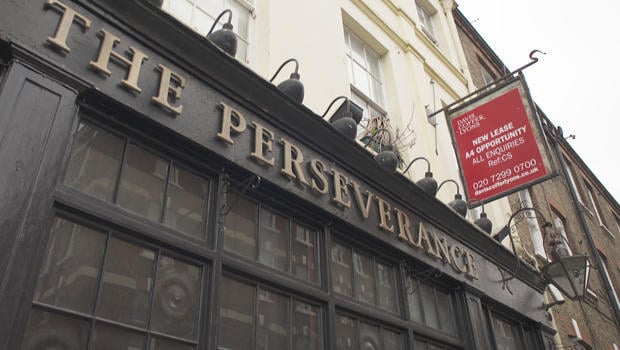 A sign of the times for many of England’s pubs.

That’s the fate the Packhorse faced.  When a developer announced his plans, the residents were stunned.

“So, it was almost the metaphorical pitchfork rebellion,” said Dom Moorhouse. “Posters went up all over the village essentially trying to be as loud as possible to say, ‘This just can’t happen.'”

Thanks to Moorhouse and others, it didn’t.  Here in England, if a pub is declared an “asset of community value,” patrons are given time to bid on the property.

Moorhouse said, “We were given three months to raise over half a million pounds.” And they did.

Saberi asked, “So, this pub is so important to the community that it actually bought it back?”

“Absolutely. I mean, it’s a really unique story. We have now over 430 shareholders, and not only did we raise the half million-plus pounds for the building, we had to raise another equivalent sum of money just to refurbish it.”

And in March the Packhorse reopened.  Brian Perkins poured the first pint.

When Saberi visited, the new owners – and their kids – were savoring their investment.

Saberi asked the children, “Do you guys wanna work here one day?”

When asked what they wanted to do, one replied, “Anything but the washing up!”

No one in Britain expects all pubs to disappear, and the Packhorse might just provide a glimpse of their future.

As Brian Perkins told Saberi, “I would imagine a lot of people think, ‘Well, if they can do it in South Stoke, we should be able to.’  You can do anything if you try, can’t you?”