They are moving it to the old Alstom facility, which has more space.

Mayor Coppinger said “the convention center is a multi purpose building, and we’re preparing for the worst scenario.”

They are trying to sign a new contract today and then it would take two to three weeks to open.

The Health Department announced six new cases on Monday for a total of 85.

We have 9 deaths, which is one of the highest in the state.

Director Becky Barnes blames the high death toll on a statistical lapse and on older patients in Hamilton County.

She says she believes Hamilton County’s data is ahead of the state reporting.

But she also notes that the age range of positive cases here have been older than across the state.

But they also report that only one positive case so far has been from a long term care facility.

That person was moved to the hospital and the facility cleaned.

They have not had any further cases.

As for the mobile testing that began on Friday, Mayor Coppinger is pleased that it went smoothly.

None of the people who were tested then got a positive result.

They hope to ramp up the numbers of tests this week.

The drive through test is offered Monday, Wednesday and Friday.

Remember, you need to get a referral and they will call you for an appointment. 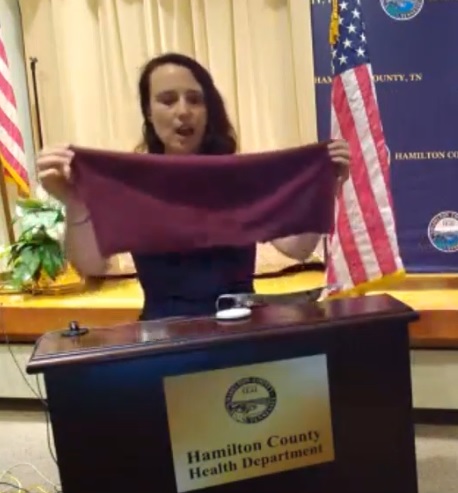 The CDC is encouraging us to wear face masks in public.  They give us a demonstration on how to make one at home.  Skip to 11:00 for that demo.