The spiritual leader of an upstate New York self-help group that has been compared to a cult pleaded not guilty on Monday to newly filed child pornography charges at a hearing where it became clear that his co-defendants are trying to avoid going to trial with him next month.

Keith Raniere was charged last week with exploiting a child and possessing child pornography. He had previously pleaded not guilty to charges accusing him of operating a secret society within his NXIVM group that forced women “slaves” to have unwanted sex with him and branded them with his initials.

In this April 13, 2018 courtroom sketch Keith Raniere, second from right, leader of the secretive group NXIVM, attends a court hearing in the Brooklyn borough of New York. AP

Assistant U.S. Attorney Moira Penza told a judge on Monday that the government is in “active plea negotiations” with three defendants. Additionally, defense attorney Mark Geragos said his client, Seagram liquor fortune heiress Clare Bronfman, will be asking for a separate trial on charges she bankrolled the Albany-based group, which has also been called a pyramid scheme.

“We don’t need to be the collateral damage,” Geragos said.

Geragos said he expects Bronfman and Raniere will be the only two to face trial. Included among the three remaining defendants contesting their charges is Allison Mack, best known for playing a teenage friend of Superman on the “Smallville” TV series. The comments from Geragos indicate Mack is one of the three defendants the prosecutor said were in plea negotiations. 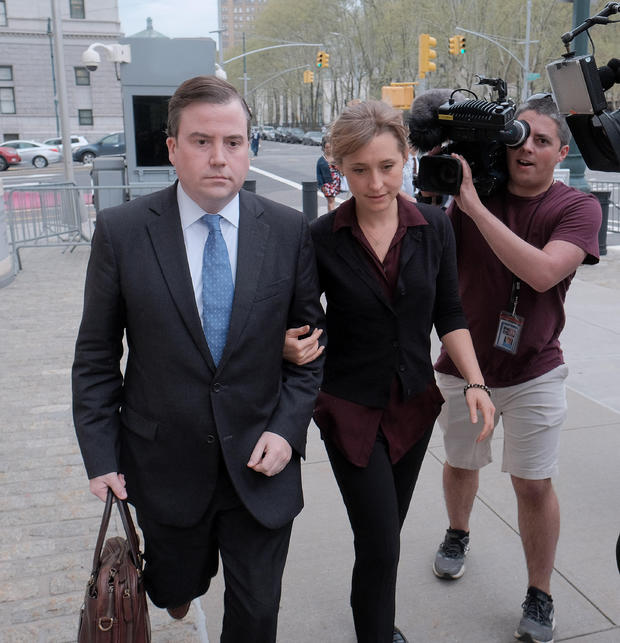 Actress Allison Mack, center, arrives at the United States Eastern District Court for a bail hearing in relation to the sex trafficking charges filed against her on May 4, 2018 in New York City. Jemal Countess / Getty Images

“The gravity of these charges is monumental,” one the attorneys, Marc Agnifilo, said Monday.

U.S. District Judge Nicholas Garaufis told the defense lawyers that he wants them to file briefs by the end of the week before he would rule on how to go forward.

The prospect that the 58-year-old Raniere — known as “Vanguard” within his group — could stand trial without all of his co-defendants began to take shape last week when NXIVM’s chief executive, Nancy Salzman, became the first defendant to plead guilty. She admitted to stealing identities of the group’s critics and hacking into their email accounts, as well as conspiring to doctor videotapes before they were turned over to plaintiffs in a New Jersey lawsuit against the group.

According to a government filing, the new charges against Raniere involve “a 15-year-old girl who was employed by Nancy Salzman and who — 10 years later — became Raniere’s first-line ‘slave'” and “a child whose sexual relationship with Raniere was known to, and facilitated by, members of the Enterprise.”

Regarding the teen, the papers say the evidence includes child pornography Raniere created and possessed and “electronic communications between the victim and Raniere reflecting their sexual relationship and indicating that it began when she was 15 years old.”

Raniere has denied the allegations. He’s been jailed without bail since being brought to the U.S. in 2018 following his arrest in Mexico.