The death toll has increased to 23 from a tornado that tore through Lee County in eastern Alabama Sunday, Coroner Bill Harris says. Sheriff Jay Jones described damage as “catastrophic” based on the destruction of homes in the area, CBS affiliate WRBL-TV reported. Jones confirmed children were among the dead and some people were still thought to be missing. A search and rescue operation was ongoing.

Jones told WRBL-TV he couldn’t recall “at least in the last 50 years … a situation where we have had this loss of life that we experienced today”:

“I cannot recall, at least in the last 50 years, and longer than that, a situation where we have had this type, this loss of life that we experienced today,” said the sheriff of Lee County, Alabama, of the possible tornado that hit the area. https://t.co/fzH4wCp3Y0 pic.twitter.com/uJql6MaLD6

Multiple homes were destroyed or damaged in Beauregard, about 60 miles east of Montgomery, Rita Smith, a spokesperson for the Lee County Emergency Management Agency, told The Associated Press.

The area was dark and electricity appeared to be knocked out in many places late Sunday. Pieces of metal debris and tree branches littered the roadside.

Scott Fillmer, of nearby Auburn, Alabama, tweeted video that gives an idea of the destruction the twister left behind:

Mayor Fred “Bubba” Copeland, of Smiths Station, a small city in Lee County, told CBS News some 20 homes were destroyed there and many people had to be rescued. He helped pull two trapped elderly women from a home.

A sign from the Lee County Flea Market was found 20 miles away, in Hamilton, Georgia.

The National Weather Service said there were indications the tornado that struck Lee County was at least an EF-3, which means it had winds estimated at 158-to-206 mph. A more complete analysis was planned for daylight Monday. The twister was estimated to be at least half a mile wide.

Here’s a radar loop of the destructive tornado that ripped through southern Lee County earlier today. This was the 1st tornado to impact the county. #alwx pic.twitter.com/QfKIju6OuN

Harris told the AP he had to call in help from the state, because there were more bodies than his four-person office could handle. In all, about 150 first responders were called in to assist.

“Our hearts go out to those who lost their lives in the storms that hit Lee County today. Praying for their families & everyone whose homes or businesses were affected,” Gov. Kay Ivey tweeted Sunday.

This image shows the destruction in Lee County on Sunday, March 3, 2019. Elizabeth White/WRBL-TV

No deaths had been reported Sunday evening from storm-damaged Alabama counties other than Lee, said Gregory Robinson, spokesman for the Alabama Emergency Management Agency. But he said crews were surveying damage in several counties in the southwestern part of the state.

Numerous tornado warnings were posted across parts of Alabama, Georgia, Florida and South Carolina on Sunday afternoon as the powerful storm system raced across the region.

In rural Talbotton, Georgia, about 80 miles south of Atlanta, a handful of people were injured by either powerful straight-line winds or a tornado that destroyed several mobile homes and damaged other buildings, said Leigh Ann Erenheim, director of the Talbot County Emergency Management Agency.

Televised broadcast news footage showed smashed buildings with rooftops blown away, cars overturned and debris everywhere. Trees all around had been snapped bare of branches.

“The last check I had was between six and eight injuries,” Erenheim said. “From what I understand it was minor injuries, though one fellow did say his leg might be broken.”

Henry Wilson, of the Peach County Emergency Management Agency near Macon in central Georgia, said a barn had been destroyed and trees and power poles had been snapped, leaving many in the area without power. 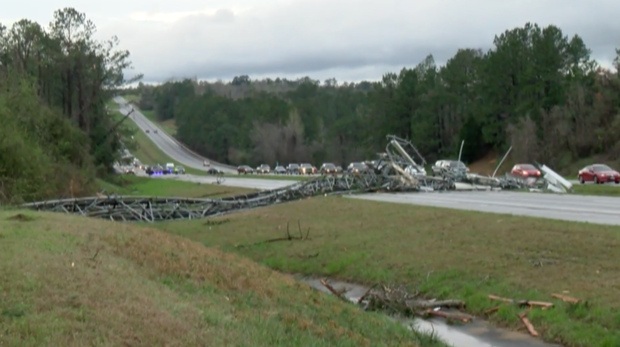 Authorities said a tornado was confirmed by radar in the Florida Panhandle late Sunday afternoon. A portion of Interstate 10 was blocked in one direction for a time in Walton County in the aftermath, said Don Harrigan, a meteorologist for the National Weather Service in Tallahassee.