Lost dog found after months separated from her family

CHATTANOOGA (WDEF) – We’ve got a happy ending to a missing dog story that spanned several months and states!

A Goldendoodle named Ms. Beasley jumped a fence in Chickamauga, Ga more than a year ago during a visit from Arkansas.

Her owner had to go home with out her.

But Melanee Lundquist’s family has kept an eye out for Ms. Beasley ever since.

Just recently, someone posted on Facebook about a dog roaming the Lookout Valley area for several months.

The family sent it to Lundquist who drove 10 hours back to Chattanooga to investigate.

She staked out the area for several days, but Ms. Beasley wouldn’t come to her.

Then just before she was ready to leave again, someone called to say the dog had been spotted again.

People had been feeding her bread at the Mapco gas station.

She didn’t immediately recognize her owner.

But when Lundquist turned her back, and fed her some beef jerky, Ms. Beasley remembered.

“I don’t know that I can put it into words, I really don’t. I put it into some pretty ugly crying last night but I don’t think I spoke words. I just said ‘I have you, I have you, we’re going home, I’m taking you home.’ I’m just shocked.”

It was a homecoming this family has been waiting for.

Her owner says she couldn’t have done this without the communities help.

“I don’t know if I have ever seen a community like this one. Nobody has said anything but ‘we want to help,'”says Lundquist.

Ms. Beasley is kind of a mess after her year in the wild, but she’s now on her way back to Arkansas with her family.

She will meet with her vet Tuesday morning to start the shaving and health inspection process. 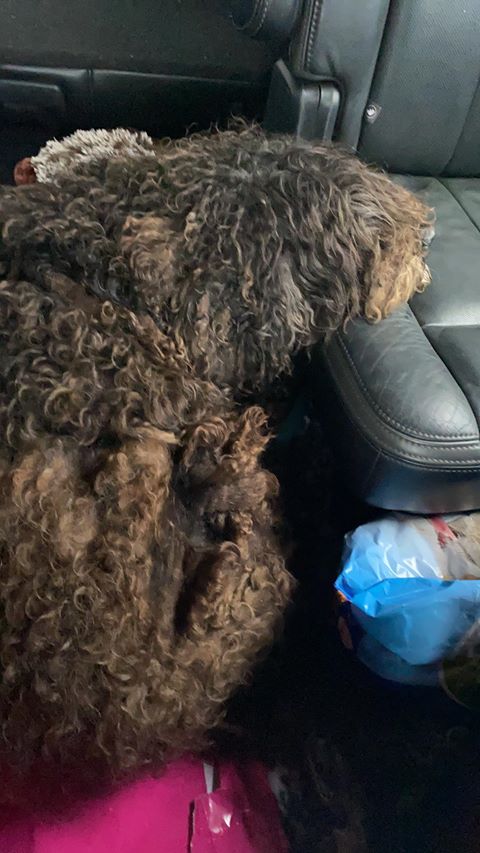