A lost girl’s diary: The hidden anguish of Alexandra Valoras

Alexandra Valoras would look so familiar to so many parents – the sweet little girl singing and dancing her way through her teen years, recognized for achieving outside the home, and thoroughly cherished inside it. “Alexandra, she was such a happy girl, so motivated and so just full of life,” said her mother, Alysia.

Just weeks after a family ski vacation, this 17-year-old high school junior, straight-A student, class officer and robotics whiz made her bed, tidied her room, and then walked to a highway overpass in Grafton, Massachusetts.

Her father, Dean Valoras, described finding her: “I leaned over the embankment and looked down and I saw her. I was just hoping for warmth. But there was no warmth; there was none. And all the cars kept driving by. And my daughter’s on the side of the road. Nobody saw this. And she’s cold.”

Nearby, Dean and Alysia found two journals in their daughter’s belongings. Her final entry, written just hours before her death, while listening to a playlist she entitled “Good-bye”:

Flipping through pages, Dean showed correspondent Jim Axelrod some of the entries: “October 20, I’m so lost, I’m so hopeless, I am so worthless.”

There were phrases and words such as “I’m not good enough, I’m worthless.”  “These things that we never heard,” Alysia said. “There was just so much joy in everything she did, and it doesn’t match what was in the journal.”

Two-hundred pages of self-loathing and despair, written in Alexandra’s own hand.

Alexandra was a highly-motivated achiever, “but that’s how she felt inside,” said her mom.

Such a sharp and confusing contrast to who they thought was their happy oldest child, strumming her way through adolescence, and still talking to her parents. “It doesn’t seem possible,” Alysia said. “But it’s what reality was, because it’s written right there.”

With teen suicide at a 40-year high for young women Alexandra’s age, and now the second-leading cause of death for 15- to 24-year-olds of both sexes, this disconnect is what most haunts Dean and Alysia Valoras. The girl who seemed to love it when her parents took her to a concert by the Scottish rock group Biffy Clyro, went home and wrote: “I hated it. I just wanted to be alone.”

Two weeks before she died, on March 19, 2018, Alexandra’s robotic team won regionals, and a place in the international finals. “We were there that day, and she was so excited, but none of that made the journal,” said Alysia.

Instead, the next entry read: “I need an excuse as to why I’m doing poorly.” 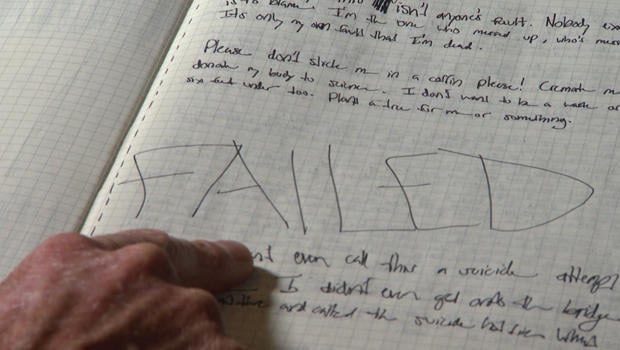 The journals were a complete shock to her English teacher Tim Freitas. Axelrod asked him, “Her intellect, her candle power, where does that rank out of nine years’ worth of high school kids?”

“Number one or number two, absolutely,” he replied.

Alexandra had confided in him that she was having a hard time staying motivated, but Freitas chalked it up to teenage angst. “It’s always playing back, how would you do things differently now that the outcome has been seen,” he said.

“You still wrestling with that?”

“Of course. How do I go forward and have kids sit right in front of me, and I don’t have a clue what’s going on in their personal lives, but still try and figure out if something is going on?”

Her friends are also haunted.  “I think we all carry a little guilt,” said Molly Turner. “Because we all though we knew her so well. And it’s like, how did I not see that?”

Turner and Zoe Mahoney were two of Alexandra’s closest friends at Blackstone Valley Technical High School. They were in engineering shop together.

Alexandra wrote about the shop in her journal: “A hangout with my shop is some place I can let my guard down a bit more. I shouldn’t do this really.  I am pretty sure they’ve noticed I’ve been out of it for awhile, but I don’t want to concern them.”

Axelrod asked, “When you hear that, does it make you happy to know that was a safe place for her, or something else?”

“It’s like, I feel so happy that she was able to let her guard down, but I feel like she shouldn’t have had to have a guard up at all, like, at any time,” Turner replied.

“I think we noticed that she was a little more stressed than usual,” Mahoney said. “But with junior year, everyone’s stressed. It’s normal to stress.”

Many of Scott White’s 40 years as a guidance counselor were spent in affluent New Jersey communities full of high-achieving kids. He said, “I have more kids who are cutting, who are attempting suicide, who are entering in-patient facilities, students who in the past would’ve been considered the sort of model students.

“We have a culture that makes kids think that if they’re not perfect, they’re less than good,” he said.

Alexandra’s journal includes a checklist: “What will get me into MIT? Valedictorian, first robotics captain, 100 plus hours service award, model U.N., attend both conferences, win.”

Axelrod asked, “Is there something wrong with these goals?”

“There’s no balance on these goals,” White replied. “Not every person can reach them. Whether that child can reach them, it’s sort of unknown. But if she did, there would be another goal beyond that. You know that and I know that.”

For Alexandra, nothing was good enough. Alysia said, “There was no pressure that you have to get into this school, you have to do this. She put that pressure on herself.”

“I don’t want this notebook to end, I love it more than myself (?) I need a place where there is no need for me to be perfect.”

Dean said, “What Alexandra was drifting towards as you read through the journal is a place of unhealthy thinking. And I would probably wager that there’s some type of mental diagnosis that could have been done.”

Which is why Dean and Alysia Valoras are taking the crippling pain public that most keep private, leading suicide prevention walks, and visiting schools to share Alexandra’s story.

He said, “The hurt, the sadness is evolving. And now there is this thing called living, so that I am a good father, a good husband, a good person.”

They hope that in sharing the story of their daughter, maybe another family will be spared this trauma.

Alexandra’s last journal entry, dated March 18, 2018, read: “What I will miss by dying tonight. The possibility of anything getting better.”

Alysia said, “There’s a lot of other kids out there that are like her, that are high-achievers, that are balancing a lot. That’s what makes her very relatable, and why it’s affecting people, and why they are listening because I have a child like this, too.”

And in the pain of what Alexandra wrote to her parents in her final entry hours before she took her life (“Don’t blame yourselves for not seeing warning signs”) is also what the Valoras family hopes to salvage from her death – some meaning for others.

Last summer, the morning after an interview was published, they found this note on their doorstep, signed “A Friend”: “What you have said in Alexandra’s article truly changed my life.”

Alysia said. “Knowing that families are talking to their kids about their mental health, it lets me know that she didn’t die in vain. She’s having such a huge impact. And that feels really good.” 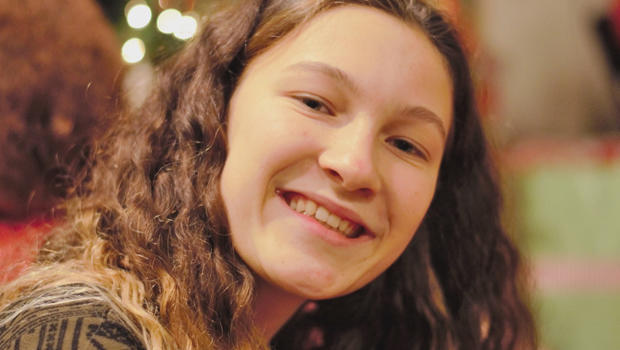