OOLTEWAH, Tenn. (WDEF)- A crash in Ooltewah injured one person and snarled traffic earlier this afternoon.

This was the scene on the 6800 block of Mountain View Road, which is right next to I-75. Witnesses say that a driver of a white Chevrolet Silverado pulled out in front of a utility truck and was t-boned.

The Tri-Community Fire Department, who responded to the scene, said the driver of the Silverado was entrapped, and had to be rescued as first responders pried open the driver door to get them out.

The driver of the Silverado was taken to the hospital by Hamilton County E-M-S, where they have non-life threatening injuries.

No word on the condition of the utility truck driver.

Traffic on I-75 in the area was backed up due to drivers rubbernecking to view the crash. 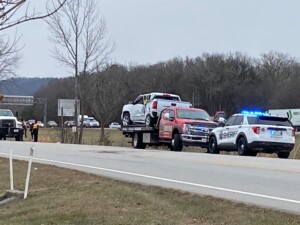 A Chevrolet Silverado after being t-boned on Monday in Ooltewah.