What happens to products you buy that you return? And what about the stuff that brick-and-mortar-stores or online merchandisers can’t sell? It may end up in the hands of Curtis Greve, a vice president of Inmar, which has 25 facilities and 5,000 employees around the country devoted to processing and reselling goods for what’s known as the secondary market.

His company handles “Everything from diapers to dinosaurs,” he said.

Truckloads of stuff arrive and leave Inmar warehouses every day. Much of it is merchandise that traditional outlets just can’t unload. or outdated seasonal products. But a third of it is customer returns, mostly from online purchases.

“A typical brick-and-mortar store will return about 8% of their sales,” Greve told correspondent Rita Braver. “For ecommerce, that can be 25% to 40% in some cases.”

Up to 40% of merchandise sold via online sites may be returned, and all the stuff will wind up in the secondary market, where one company’s trash can become other people’s treasure. CBS News

Inmar provides a service for companies, inspecting and repackaging returned goods that do go right back on the shelves. But a lot doesn’t make it.

And what happens to all that stuff? “That’s my favorite kind of stuff – that’s where we get to liquidate it,” Greve said.

Inmar CEO David Mounts says that the secondary market – selling goods of all kinds – has doubled in the past ten years, to $600 billion.

“In fact, there’s so much of that stuff coming back from either e-commerce or stores that you could take all of the units that we process in one year and build a bridge from New York to Tokyo,” Mounts said.

And a lot of them come to Las Vegas twice a year for a big trade show. So of course, Curtis Greve is there, too, looking to buy, sell, or reconnect with longtime clients, like Brady Churches, the CEO of HomeBuys, based in Columbus, Ohio, with four discount stores around the state.

“We love to buy the treasures and pass the savings on to our customers. That’s the most fun,” Churches said.

Braver watched Churches snag close to 400 jackets in just a few minutes, all returned to a major retailer: “These jackets are high-quality jackets,” he said. “They’re a major brand. I don’t want to tell you the brand, but there’s a horse and buggy involved in the brand, I’ll tell you that.”

He also got shirts to go with the jackets. Retailing at $99, he paid $8 apiece. “I have an adrenaline rush right now,” he said. “I feel good. I feel like I just won a million bucks!”

But nothing beats the recent thrill of landing some $2,000 wedding gowns and selling them for $199 each. “We even had some women come in the store and say, ‘I don’t even have a boyfriend right now, but for $199 I’m gonna buy this dress today!'” Churches said. 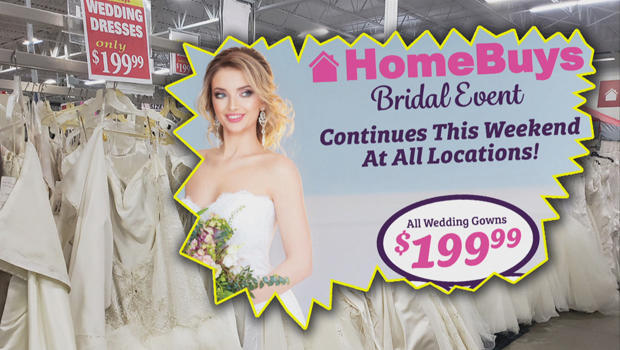 Who needs a groom, when you can have the dress for under two hundred dollars?  CBS News

Almost all of these products will find buyers, and what doesn’t sell is often donated to charity. But there are still some goods that end up in incinerators, or tossed along with other garbage at landfills.

Visiting a landfill in Burlington County, N.J., Braver asked Lyons, “The number I keep hearing is there’s something like four billion tons of unused goods that still ends up getting dumped in places like this?”

“That’s correct. Instead of packaging it and maybe possibly getting it to folks that might need it, it’s easier for them just to get it off their books,” Lyons said.

“Have things improved over the years?”

“It has improved a little,” he replied. “But not enough to handle the glut.” 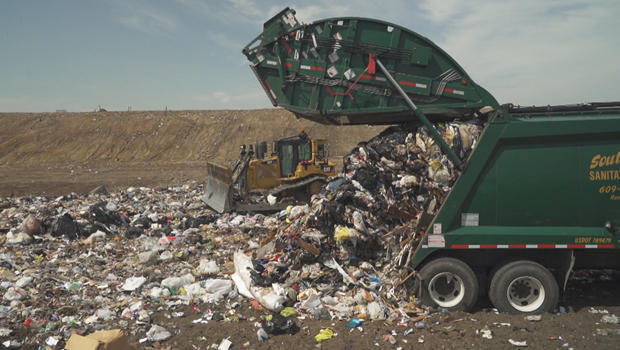 But Inmar’s Curtis Greve believes that companies like his will continue to expand, as more and more buyers and sellers realize that one company’s trash is other people’s treasure.

“A lot of this product is really good product,” said Greve. “You know, it’s as good as new. In some cases. it is new!”