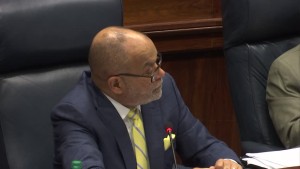 CHATTANOOGA, Tenn. (WDEF)- The saga of Hamilton County Attorney Rheubin Taylor appears to be far from over after the Hamilton County Commission unanimously voted to keep him in office for the remainder of his contract on Wednesday. That contract lasts for two more years. The dispute began last week when Mayor Wamp announced he would not reappoint Taylor.

News 12 went inside of the courthouse on Thursday, and found that the County Attorney’s office was indeed open. When asked if Mr. Taylor was available for comment, we were told he was not. However, his name is still on the bulletin board in the center lobby of the second floor. That with confirmation from a sitting county commissioner that he has been working without pay, suggests that he is still on the job.

It’s possible this matter will have to be settled in a Tennessee state court, which would determine who between Mayor Wamp and the Commission has the right to make this decision. In the Tennessee State Code outlining the responsibilities and powers of county mayors, it states in part, “the county mayor shall appoint members of county boards and commissions and county department heads. Such appointees shall be subject to confirmation by the county legislative body, and in so doing, the legislative body may express its views fully and freely and shall vote for or against confirmation.”

It all boils down to, does Mayor Wamp have the right to not reappoint a sitting attorney who is still under contract and whom the county commission has voted to retain? It remains a question of how long it will take for that question to be answered.