ATHENS, Tennessee (WDEF) – McMinn County will feature a homecoming as part of their Centennial Celebration on Friday, November 8th.

Actress Peggy Dow is returning to Athens for a screening of one of her movies. 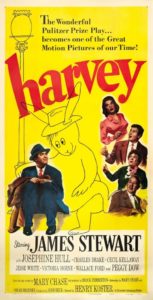 The comedy is about a middle age man who sees a six foot rabbit, that no one else can see.

Stewart got an Academy Award nomination for the role.

Dow played a nurse at the mental hospital where Stewart is taken.

Peggy lived in Athens for awhile and was married there, but hasn’t been back in years.

The 91 year old retired-actress will attend a public screening of “Harvey” at 4:30 PM at the Movie Palace.

She will take part in a Q&A session about the movie afterwards.

Dow appeared in 9 movies in the early fifties before retiring to get married to an oil tycoon.