JASPER, Tenn. (WDEF)- This week, two different memorials in memory of the late Marion County detective Matt Blansett were unveiled to the public.

Blansett was killed in a fatal helicopter crash right off of I-24 in Marion County on August 23rd of last year.

One memorial is a mural that has been painted inside of the Walmart in Kimball. It depicts among other images a painting of Blansett in his South Pittsburg Pirates football uniform, of which he was a part of the 1999 State Championship football team. 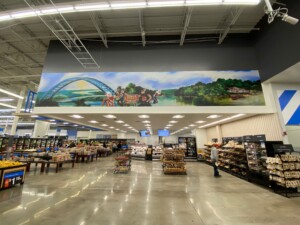 Mural that includes a painting of the late Marion County detective Matt Blansett in his South Pittsburg football uniform inside of the Walmart in Kimball.