RINGGOLD, Ga. (WDEF) – It’s been one year since a young man was killed on I-75 on Catoosa County after a police chase came to a violent end.

24 year old Jeffery Thomas Jr. was out late January 23, 2022 when a police officer in Whitfield County flashed his lights to pull him over.

Thomas did not pull over and a police chase began throughout North Georgia into Catoosa County.

A Georgia State Trooper attempted a PIT maneuver, and at first he failed to spin out Thomas.

However, the second time, he succeeded and Thomas is spun into an exposed guardrail.

According to Georgia State Patrol Thomas’ BMW flipped over and he was ejected from the vehicle.

Thomas would die later from his injuries.

One year later, his mother, Glenda Marsh, is still looking for answers for the son she says was a beacon of positivity.

Especially since he leaves behind a six year old daughter.

Marsh now heavily advocates against the practice of the PIT Maneuver.

The Georgia State Patrol was unavailable for comment on this story, but they did send us their policy on PIT Maneuvers.

In their definition of a PIT, it states that any officer has to have quote, “advanced practical training” prior to using it in a chase.

The definition claims that quote, “if executed by properly trained members under reasonable and prudent circumstances, the PIT Maneuver does not constitute deadly force.”

In other circumstances in Georgia it is considered deadly force and must only be used when authorized by law.

This is a distinction that Marsh does not agree with.

Marsh said that, “People really don’t know that the police could get behind you and do this. (This is something that people see on movies and video games. They’re not really thinking that the authorities are doing. They’re here to protect us, not kill us.) I feel like instead of the PIT Maneuver, it should be the death maneuver.”

Marsh has met up with others across the country who have also lost loved ones as a result of the PIT Maneuver.

They have formed an organization called TKO The Pit Maneuver.

They have protested at locations like the Georgia State Capitol and the Whitfield County Courthouse trying to raise awareness about the death of their loved ones.

Marsh has a message for officers.

Marsh said that, “Think about it before you use this technique. Especially if you have a family.”

Every jurisdiction has different rules on when officers can or can’t use the PIT Maneuver.

News 12  reached out to several agencies who all have different rules on this technique.

Notably, the Tennessee Highway Patrol and Chattanooga Police Department both say they do not teach the PIT Maneuver as part of their training and do not use it.

Another member of the TKO The Pit Member organization who lost her son in a PIT incident in North Carolina reached out to News 12 and said she’s in the process of lobbying governments both at a state and federal level to outlaw this technique.

Marsh says that a clear story about the incident still has not been given to her by officers and she is still seeking closure for her family. 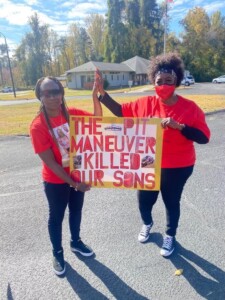