Kristina Budhoo and Gordon Dempster were just college students in Jamaica when their love for imported, artisan cheeses turned from a passion to a purpose. But when they started, the only thing they knew about it was that it’s made from milk.

“We didn’t even have a plan. We just said, ‘Alright let’s make cheese,'” Dempster said.

“No one was making cheese in Jamaica, and we had all this milk from these goats and cows and everything, and no one was doing anything with it,” added Budhoo.

Four years later, Kristina and Gordon’s impromptu idea is now a growing business. They own and operate their own brand of artisan cheese, Outland Hurders Creamery and Farmstead. But with thousands of varieties on the market, making the cut takes a lot more than making a decent wheel of cheese. So Kristina and Gordon made the trip Murray’s Cheese in New York City to take part in a highly coveted three-day intensive course known as cheese boot camp. It’s offered only four times a year with just 24 seats available in each session.

Elizabeth Chubbuck, the senior vice president of sales for Murray’s, said the boot camp started as a six-week course in 2006, the result of customer demand.

Students come from all over – for a range of reasons – and are taught by an American Cheese Society-certified cheese professional who begins boot camp with lessons in history and geography.

On the second day, there’s a field trip to Murray’s Cheese caves in Long Island City, one of the biggest draws for those looking to further their education in cheese making. Before they can even enter though, the students have to complete a chemistry course on milk. Once sanitized and suited up, the group is guided through the aging process, known as affinage. It takes place in the caves which are monitored 24/7 for specific humidity and temperature.

On the final day of boot camp, glasses of wine and beer are poured for pairings classes taught by industry experts. Students are then put to the test when it comes to slicing and wrapping different styles of cheese – all skills it takes to become what’s known as a cheesemonger. 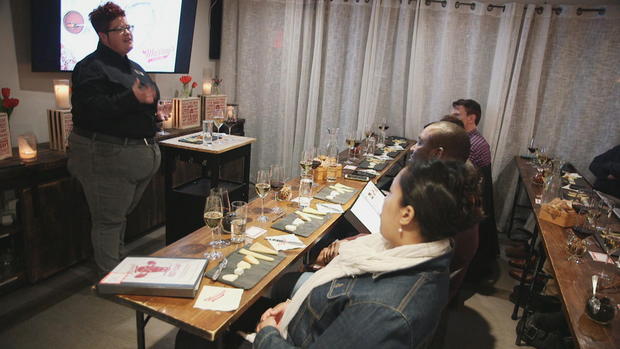 At Murray’s, Cielo Peralta is quite literally the big cheese among them. He can walk a customer through the more than 300 international cheeses that are in the front case at Murray’s, a case which one day Kristina Budhoo and Gordon Dempster hope will have one of their Jamaican cheeses.

“It transforms you to a different place, and it takes you there, through the flavor of the cheese,” Budhoo said. “So we want to be able to represent Jamaica through a piece of cheese, which is crazy to just think about as it is, but also magical to imagine that a piece of cheese can transform you to Jamaica, or anywhere else.”