News 12 was right there with them.

Nashville put on quite the party for the Music City and the rest of the country to celebrate New Year’s Eve on CBS.

“To get to ring in the new year, co-hosting such a big event in country music is, it means a lot to me,” King said.

The event featured nearly 50 performances across multiple locations – Allen and King were two of them.

Nashville Convention & Visitors Corporation President Deana Ivey says it takes a lot of planning to make it all happen. They start on January 2.

Ivey says visitors from all over Tennessee – and even the world – come out for the event every year.

“The best part is, you know, just the fun that it brings to our visitors and our local residents here. They love this event,” Ivey said. “It’s just a great way to celebrate what Nashville is all about and what Music City brings to this country.”

And it wouldn’t be a great show without country music legends like Brooks & Dunn, and great collaborations like Zac Brown Band and The War And Treaty.

“Collaboration represents Nashville period,” said Michael Trotter, Jr. of The War And Treaty. “[Friday] we went to Zac [Brown’s] house, and we just ate and ate and ate and ate, and I can’t wait to get back over there to eat more food. That’s how it feels.”

Kelsea Ballerini even played several songs from her latest album, which was released in September.

Elle King also had a busy 2022, and already looks to have an action-packed new year, with her new album out later this month.

If you missed Saturday night’s New Year’s Eve special on News 12, you can still watch it on-demand on Paramount+. 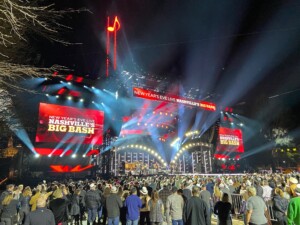