Herschel Walker has closed the gap on Sen. Raphael Warnock

ATLANTA (WDEF) – A new CBS poll release today shows the Senate race in Georgia is a toss up.

Warnock has been leading Walker all along, but several polls now are showing that Walker has closed the gap just over six weeks before election day. 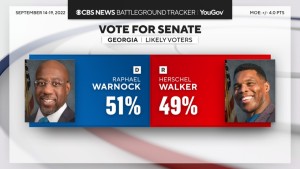 If the “leaning” and “likely” races go the way predicted, Republicans and Democrats will be tied in the Senate. The four toss up races will determine the balance of power.

Recent polls have also shows that Stacey Abrams has also been closing the gap in the Governor’s Race.

But the new CBS poll shows that Gov. Brian Kemp is still holding an edge in the race. 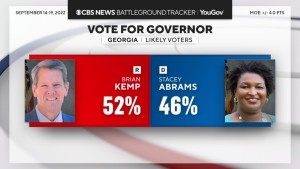 The margin of error in the poll is ±4.0 points.