Officials in Red Bank opened the White Oak Connector to Stringer’s Ridge this morning. It provides a less than a mile direct gravel path to the series of trails at Stringer’s Ridge.

Red Bank mayor Hollie Berry said this was a long time in the making. She said that, “This has been a long envisioned connection since the inception of Stringer’s Ridge itself. There was the concept that it would be possible to connect White Oak Park which has been there longer to the newer Stringer’s Ridge. But now after much negotiation with private land owners, partnerships with real estate developers, and Trust in Public Land negotiating it all, we finally managed to get this to the final stage of completion. It’s totally open to the public and it’s a beautiful trail. I encourage everyone to come out and check it out for themselves.”

The distance to landmarks such as the Stringer’s Ridge Overlook are not too distant from this new connector at White Oak Park.

Mayor Berry says that the city of Red Bank has more plans for its parks she hopes to reveal in the future, as her goal is to have a park within 10 minutes walking distance of every Red Bank resident. She welcomes any suggestions residents of the city might have for their parks. 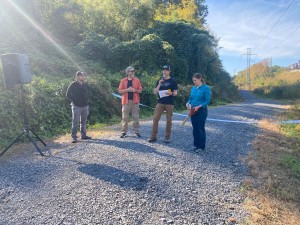