TORONTO — Canadian investigators were digging Tuesday into the life of the 29-year-old man who opened fire on restaurants and cafes in a popular Toronto neighborhood, seeking to explain what prompted the rampage that killed a 10-year-old girl and a young woman and wounded 13 others. Investigators in Canada have indications that Faisal Hussain visited Islamic State of Iraq and Syria (ISIS) websites and may have expressed support for the terrorist group, a law enforcement source told CBS News senior investigative producer Pat Milton.

Investigators are looking into whether Hussain may have lived at one time in Afghanistan and possibly Pakistan, the source said. There is no indication that Hussain was directed by ISIS to carry out the attack.

“At this stage, based on the state of the investigation, which is led by the Toronto police service, there is no connection between that individual and national security,” Public Safety Minister Ralph Goodale said Tuesday.

The assailant’s family has said he suffered from psychosis and depression for years but they never imagined he would do such a thing. It was not immediately clear whether he took his own life or was killed by police during the attack Sunday night.

The mass shooting in Toronto’s Greektown neighborhood stunned people in a normally safe city, already unsettled by an attack just three months ago when a man used a van to plow over pedestrians on a downtown sidewalk, killing 10 people and injuring 14 in an attack apparently aimed at women.

A statement from Hussain’s relatives said he had lifelong “severe mental health challenges.” They said medications did not help him and the interventions of professionals were unsuccessful.

“While we did our best to seek help for him throughout his life of struggle and pain, we could never imagine that this would be his devastating and destructive end,” the family said. “Our hearts are in pieces for the victims and for our city as we all come to grips with this terrible tragedy. We will mourn those who were lost for the rest of our lives.”

Police officers walk past Alexander the Great Parkette while investigating a mass shooting on Danforth Avenue in Toronto, Canada, July 23, 2018.

Investigators searched the low-income apartment that Hussain shared with his parents and siblings on Thorncliffe Park Drive in the eastern part of the city, and removed boxes of potential evidence overnight. An autopsy on Hussain was expected Tuesday. Police have not said where Hussain got his handgun.

Canada overhauled its gun-control laws after the country’s worst mass shooting in 1989, when gunman Marc Lepine killed 14 women and himself at Montreal’s Ecole Polytechnique college. It is now illegal to possess an unregistered handgun or any kind of rapid-fire weapon. Canada also requires training, a personal risk assessment, two references, spousal notification and criminal record checks.

During a debate in City Council on Tuesday, Councilman Joe Cressy asked if Toronto could outright ban guns and was informed it would be up to the federal government to change the laws. Mayor John Tory has also questioned why anybody would need a gun in Toronto.

Don Peat, a spokesman for the mayor, said the Council was considering a motion on Tuesday urging the federal government to ban the sale of handguns and handgun ammunition in Toronto.

Canadians have long taken comfort in the peacefulness of their communities and are nervous about anything that might indicate they are moving closer to their American counterparts.

Still, though mass shootings are rare in Canada’s largest city, Toronto police had deployed dozens of additional officers over the weekend to deal with a recent rise in gun violence. The city has seen 23 gun homicides so far this year, compared to 16 fatal shootings in the first half of 2017.

Police Chief Mark Saunders said he would not speculate on the motive for Sunday’s attack. “We do not know why this has happened yet,” he said. “It’s going to take some time.”

Among those killed, was 18-year-old Reese Fallon, a recent high school graduate who volunteered for Canada’s Liberal Party and was to attend McMaster University in the fall. Her family said they were devastated.

“She was … smart, passionate and full of energy. It is a huge loss,” said Nathaniel Erskine-Smith, a member of Parliament who knew Fallon.

Flags at Toronto City Hall as well as at Fallon’s former high school, Malvern CI, were lowered to half-staff. Officials did not identify the 10-year-old who was killed or name any of the 13 wounded, who included six women and girls, and seven men. The wounded ranged in age from 17 to 59. 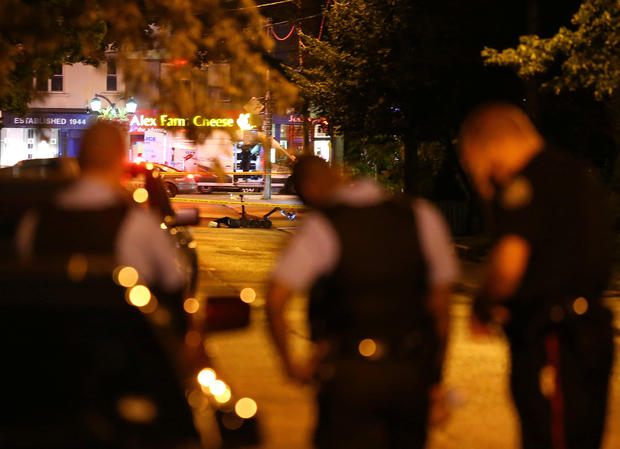 Bomb disposal robot is seen deployed within police cordon near scene of mass shooting in Toronto late on July 23, 2018

According to videos and witness accounts, the assailant, clad all in black, was seen walking quickly down a sidewalk on Danforth Avenue, firing a handgun into shops and restaurants in Greektown, a district of expensive homes, eateries and cafes.

At the corner of Danforth and Logan, where some of the shots were fired, about 50 people milled about on a small square Monday evening, talking in several languages. They expressed shock at a shooting in such a neighborhood.

Some hugged, some wept, and many said they wondered how the attacker obtained a gun in a country with far stricter gun laws than in the neighboring U.S. People signed a makeshift memorial reading: “We are Danforth strong.”

“I’m out of my mind just thinking about it. It’s Toronto,” said Augustino Speciale, who paused to smell a bouquet of white lilies attached to a lamppost.

Ontario’s police watchdog agency said there was an exchange of shots between the attacker and two officers on a side street before the gunman was found dead.

Toronto has long prided itself as being one of the safest big cities in the world. “We were so used to living in a city where these things didn’t happen,” the Toronto mayor said. “This is an attack against innocent families and our entire city.”