Pistol braces were designed for disabled gun owners to help them better handle firearms. They wrap around the user’s forearm to help stabilize the firearms.

The ATF does not regulate gun accessories such as pistol braces. However, the new rule the federal agency is putting into place is about to make their use in many cases illegal without registering the firearms.

This is causing the alarm bells for many including Doug Kilgore, the firearms manager at Big Buck’s Pawn Shop, to go off.

Kilgore said, “The ATF took a look at these firearms, and they determined they could not be fired from the shoulder. There was insufficient surface area for the weapons to be used in that manner. Therefore, they pretty much arbitrarily decided without a hearing or due process that these are now short-barreled rifles or heavy pistols. “

The ATF defines a rifle as any weapon that is designed to be used over the shoulder and fire a single projectile for each pull of the trigger. The new rule comes after some gun owners used braces to stabilize their guns over their shoulders.

In the ATF’s purview, any gun with a barrel under 16 inches that is equipped with a pistol brace is a short-barreled rifle.

This will put many gun owners into a difficult spot.  They will have 120 days to decide what to do with their firearms that have pistol braces attached.  Not registering, disposing, or destroying these attachments will put them in violation of the law.

Mr. Kilgore also raised his concerns for disabled gun owners as the tightening of regulations on pistol braces could be in violation of the 1990 American Disabilities Act.

Kilgore said, “Where’s the American Disabilities Act in all of this? It’s almost analogous as to, the A-T-F is outlawing canes and walkers and crutches. What gives with that? Just the ADA angle is going to slap them upside the head.”

He says with this act and other recent decisions such as the recent federal case Cargill v. Garland, which overturned the A-T-F’s classification of bump stocks as machine guns, indicates that there is likely legal action coming against this ruling.  In the meantime, he has some advice for gun owners.

Kilgore said, “I would suggest that they would comply with the law. If they have questions with complying with the law, they should go see their local firearms dealer and ask them.”

News 12 did also reach out to the gun control advocacy organization, Everytown.

While they were unavailable for an interview, they did send us a statement saying in part that they believe these pistol braces allow for a loophole that allows for short-barreled rifles to be created outside of the federal government’s purview.

They believe this will improve gun safety as they say that short-barreled rifles are quote, “The most lethal and highly regulated guns on the market.”

Mr. Kilgore says that his store as a class 3 firearm dealer they’ve had to rearrange the firearms they have on display to remove pistol stocks to comply with this federal rule.

This rule has not yet been filed on the Federal registry, but Kilgore believes it will be by the end of the next week, meaning the 120-day grace period would run out by the end of May. 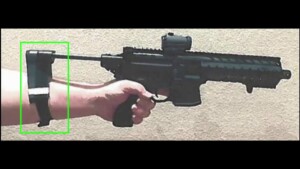 Someone holding a gun with the pistol brace highlighted. (Courtesy: ATF)