Tennessee Economic and Community Development Commissioner Stuart McWhorter announced that, “It is my pleasure to announce on behalf of Governor Lee and the state of Tennessee to welcome SK Food Group. They’re going to invest more than 205 million dollars to construct its fourth production facility right here in Cleveland, Tennessee.”

Headquartered in Arizona, they specialize in creating custom food orders for their clients and produce various sandwiches at their facilities.

After a multi-state search that included 60 considered sites, Cleveland was the winner of 840 new jobs.

SK Food’s President, Dustin Dixon, said there were two main reasons Cleveland was the place they wanted to build their new facility.

He said that “We were so welcomed by everyone we met; we recognized this is a place we wanted to call home. Maybe more importantly, were the values of the people and what we experienced here in the PIE Center. The investment in people, growing people, giving them and creating opportunities for them to take care of their families is near and dear to our hearts, and we see that here in the PIE Center with their world class training programs and development of folks.”

As part of their move to Cleveland, SK Foods will rent out space inside of the PIE Center where they will partner with Bradley County Schools to train future employees.

For the mayors of Cleveland and Bradley County, it’s a sign their community is thriving.

Bradley County Mayor Gary Davis said, “It helps us move into the 21st century so to speak, but it keeps us growing and moving.) They always say if you’re not growing, you’re actually dying, and we don’t want to be dying so we’re always working at growing.”

Cleveland Mayor Kevin Brooks said, “The ability for us to continue improving every facet of infrastructure in our city and county, we have industries like SK Foods to thank for that growth, that progress, and ultimately all the jobs and benefits that will bring all of us.”

The new SK Foods plant is going to be located at the Spring Branch Industrial Park.

It is located very close to exit 20 on Interstate 75, a key factor in their decision to build this plant here in Bradley County.

SK Foods expects to open their plant in 2025 and begin hiring people early to mid-next year.

This will be a three-phase process to build the plant through the end of the decade. 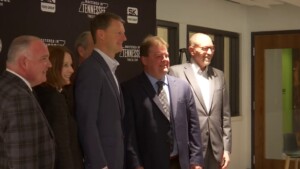 A group of officials pose for photos during the announcement of the SK Food Plant at the PIE Center in Cleveland.