New Year’s Eve around the world

The year 2019 is making its debut. Billions of people around the globe have come together to ring in the new year, bidding farewell to 2018 and welcoming 2019 with fireworks, prayer services and other festivities.

Here’s a look at how people are celebrating the arrival of 2019.

A drenching rain couldn’t keep crowds from packing Times Square for the traditional crystal ball drop and a string of star performances.

Christina Aguilera pumped up the crowd, performing in a snow-white dress and coat while partygoers danced in their rain ponchos. Bebe Rexha sang John Lennon’s “Imagine” just before the midnight ball drop.

The celebration took place under tight security. Partygoers were checked for weapons and then herded into pens, ringed by metal barricades, where they waited for the stroke of midnight. But the weather forced police to scrap plans to fly a drone to help keep watch over the crowd.

Revelers were paying up to $10 for plastic ponchos trying to stay dry. Umbrellas were banned for security reasons. 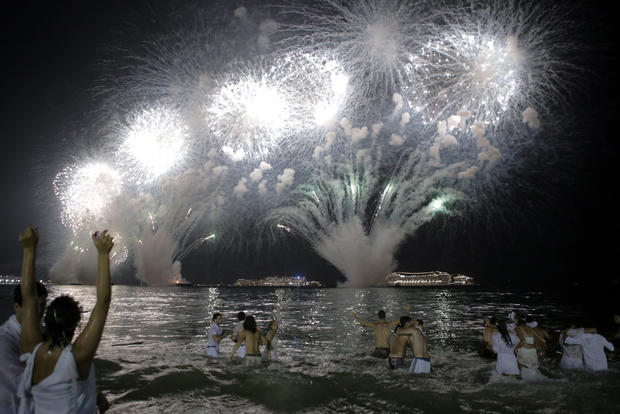 More than 2 million people celebrated the new year on Copacabana beach in Rio de Janeiro. A 14-minute fireworks display ushered Brazil into 2019 only hours before far-right politician Jair Bolsonaro will be sworn in as president.

Many Brazilians were on the road to the capital of Brasilia on Monday night to watch the former army captain’s inauguration Tuesday afternoon. The last evening of 2018 in Rio was a sticky 85 degrees Fahrenheit, and many Brazilians took a dip in the water and made their offerings to Yemanja, a sea goddess in the Afro-Brazilian Candomble faith. 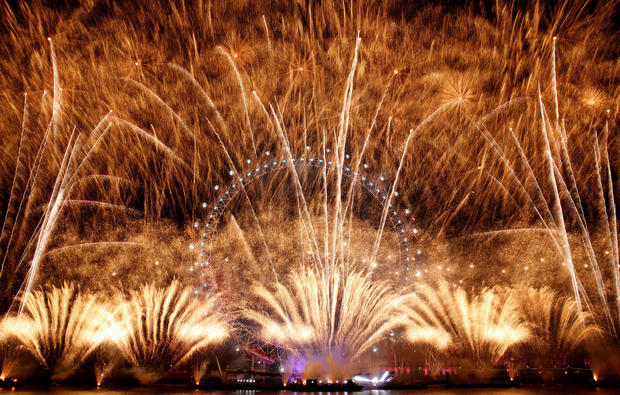 Britons ushered in the new year with the familiar chimes of Big Ben, even though the world famous clock has been disconnected for more than a year because of a conservation project. Parliament announced last week that the clock’s massive bell would sound to mark the new year with the help of a specially built electric mechanism to power the hammer, which weighs about 440 pounds.

The clock mechanism, which has kept time since 1859, has been dismantled as part of the renovation work. New Year’s Eve without Big Ben would be positively un-British.

The comforting chimes are used by TV and radio stations throughout Britain to herald the moment of transition from the old to the new year. The focal point of London’s usually rowdy celebrations was a fireworks display on the Victoria Embankment at the side of the River Thames.

Police warned people without a ticket for the sold-out event to make other celebration plans. 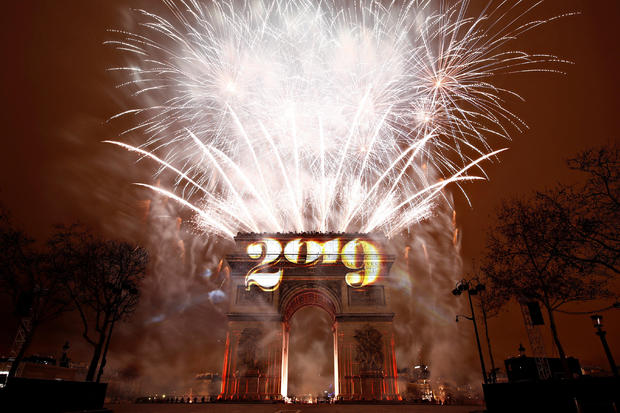 Parisians and tourists gathered on the Champs-Elysees to celebrate New Year’s Eve under heavy security. Anti-government protesters from the yellow vest movement have issued calls on social media for “festive” demonstrations on the famous avenue.

Paris police set up a security perimeter in the area, with bag searches, a ban on alcohol and traffic restrictions. The Interior Ministry said Sunday that the heavy security measures are needed because of a “high terrorist threat” and concerns about “non-declared protests.”

President Emmanuel Macron gave his traditional new year address to briefly lay out his priorities for 2019, as some protesters angry over high taxes and his pro-business policies plan to continue their demonstrations in coming weeks. Ahead of midnight, a light show illustrating the theme of brotherhood took place on the Arc de Triomphe monument at the top of the Champs-Elysees.

The police department will rely on a helicopter and about 1,200 security cameras for elevated views of the packed area. An additional 1,000 officers will be on patrol, bringing the total number of officers on duty to about 7,000.

Right before fireworks soared over Moscow’s Red Square, Russian President Vladimir Putin addressed the country, speaking to the hopefulness and excitement that comes with the new year.

“Let us wish happiness to those next to us. Let us say the warmest words to all those we treasure, thank our parents, give a tender hug to our children, and open our hearts to each other,” Putin said in the translated remarks. “After all, when millions of people share these wonderful feelings, the world is filled with love and trust.” 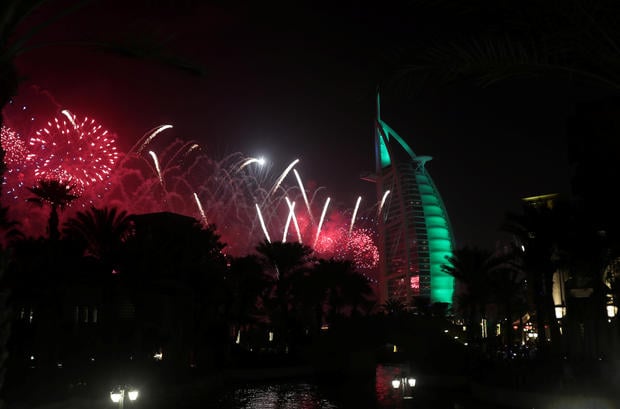 Hundreds of thousands of spectators enjoyed a firework display at Dubai’s Burj Khalifa, the world’s tallest building. Restaurants with views of the show charged guests hundreds of dollars to watch the show from their locations — even casual spots like sandwich shop Pret a Manger and burger joint Five Guys.

The display was a major improvement from last year’s LED light show that ran down the facade of the 828-meter-tall (2,716-foot) tower. In Ras al-Khaimah, a city about 60 miles northeast of Dubai, the emirate attempted to break a Guinness world record with the longest straight-line display of fireworks stretching 7.35 miles.

Fireworks in the Philippines

Dozens of people have been injured by firecrackers ahead of New Year’s Eve, when many across the Philippines set off powerful firecrackers in one of Asia’s most violent celebrations despite a government scare campaign and threats of arrests.

The Department of Health said it has recorded more than 50 firecracker-caused injuries in the last 10 days, which is expected to increase overnight when Filipinos usher in 2019 with a bang. Although still a concern, the figure is significantly lower than a year ago, partly because fewer Filipinos have purchased firecrackers due to hard economic times.

Officials have urged centralized fireworks displays to discourage wild and sometimes fatal merry-making. The notorious tradition, worsened by celebratory gunfire that turned deadly, stems from a Chinese-influenced belief that noise drives away evil and misfortune.

The Philippines celebrated the New Year at 11 a.m. Eastern Time. 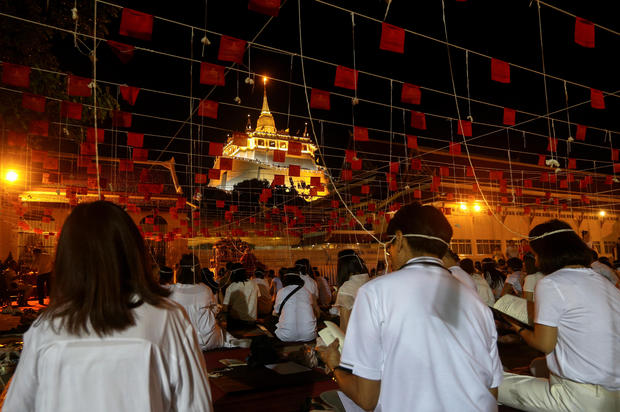 While many celebrate New Year’s Eve with fireworks, hundreds of Thais traveled to Takien Temple in a suburb of Bangkok to lie inside coffins for traditional funeral rituals. Participants believe the ceremony — symbolizing death and rebirth — helps rid them of bad luck and allows them to be born again for a fresh start in the new year.

Participants held flowers and incense in their hands as monks covered them with pink sheets and chanted prayers for the dead.

“It wasn’t scary or anything. It is our belief that it will help us get rid of bad luck and bring good fortune to our life,” said Busaba Yookong, who came to the temple with her family.

Bangkok is filled with modern glitzy malls and high-rise buildings, but superstitious beliefs still hold sway in many aspects of Thai society. 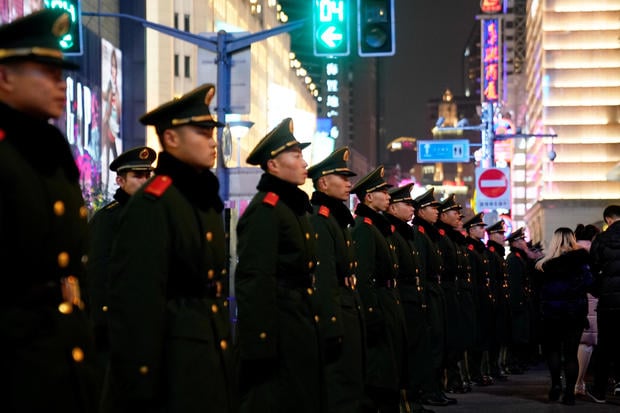 New Year’s Eve isn’t celebrated that widely in mainland China, where the lunar New Year in February is a more important holiday, but countdown events were being held in major cities and some of the faithful headed to Buddhist temples for bell-ringing and prayers.

The city of Beijing was holding a gala with VIP guests at the main site of the 2008 Summer Olympics. The event looked ahead to the 2022 Winter Games, which also will be held in the Chinese capital.

Additional police were deployed in parts of Shanghai, where a New Year’s Eve stampede in 2014 killed 36 people. In Beijing, outdoor revelers had to brave temperatures well below freezing.

President Xi Jingping, in a message broadcast at the top of the evening news, outlined the country’s achievements over the past year and said that by hosting a series of multinational meetings in 2018, “we have put forward China’s proposals and sent out China’s voice.”

In Hong Kong, festive lights on the city’s iconic skyscrapers provided the backdrop for a fireworks, music and light show over Victoria Harbor on a chilly evening. About 300,000 people were expected to line the waterfront.

Chinese New Year, often called Spring Festival in modern culture, is a 15-day celebration that marks one of several slightly differing Lunar New Years in Asia. The holiday follows the moon cycle rather than the standard calendar and always begins on the new moon, when the moon is not visible to an unaided eye.

This year’s Chinese New Year begins on February 5, ushering in the Year of the Pig.

2019 New Year’s celebrations across the globe

After an eventful year that saw three inter-Korean summits and the easing of tensions over North Korea’s nuclear program, South Koreans enter 2019 with hopes that the hard-won detente will expand into a stable peace.

Thousands of South Koreans were expected to fill the streets of the capital, Seoul, for a traditional bell-tolling ceremony near City Hall to usher in the new year. Dignitaries picked to ring the old Bosingak bell at midnight include famous surgeon Lee Guk-jong, who successfully operated on a North Korean soldier who escaped to South Korea in 2017 in a hail of bullets fired by his comrades. 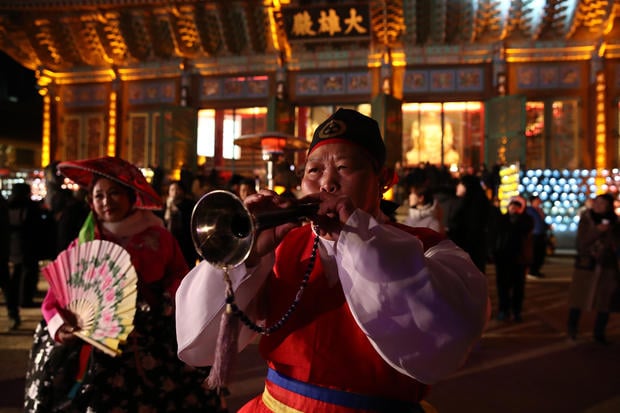 Elsewhere, about 10,000 people were expected to attend the tolling of a “peace bell” at Imjingak, a pavilion near the border with North Korea.

North Korean leader Kim Jong Un said Tuesday he hopes to extend his high-stakes nuclear summitry with President Trump into 2019, but also warns Washington not to test North Koreans’ patience with sanctions and pressure. During his televised New Year’s speech, Kim said he’s ready to meet with Mr. Trump at any time to produce an outcome “welcomed by the international community.”

However, he said the North will be forced to take a different path if the United States “continues to break its promises and misjudges the patience of our people by unilaterally demanding certain things and pushes ahead with sanctions and pressure.” Kim also said the United States should continue to halt its joint military exercises with ally South Korea and not deploy strategic military assets to the South.

He also made a nationalistic call urging for stronger inter-Korean cooperation and said the North is ready to resume operations at a jointly run factory park in the North Korean border town of Kaesong and restart South Korean tours to the North’s Diamond Mountain resort. Neither of those is possible for South Korea unless sanctions are removed.

Sydney rings in the new year in Australia 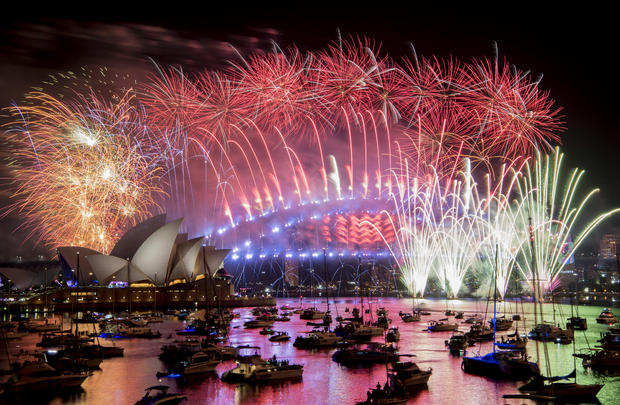 One of the most complex displays in Australia’s history included gold, purple and silver fireworks pulsating to the tune of “(You Make Me Feel Like) A Natural Woman,” made famous by Aretha Franklin, who died in August. The show used 8.5 tons of fireworks and featured more than 100,000 pyrotechnic effects.

Earlier, a thunderstorm drenched tens of thousands of people as they gathered for the traditional display, creating a show of its own with dozens of lightning strikes.

Police said they took precautions to prevent any terrorist attack, but assured revelers there was no specific threat.

More than 1 billion people around the world were expected to watch the fireworks on television.

In Melbourne, 14 tons of fireworks deployed on the ground and on roofs of 22 buildings produced special effects including flying dragons. In Brisbane, an estimated 85,000 people watched as fireworks exploded from five barges moored on the Brisbane River.

In Auckland, New Zealand’s biggest city, tens of thousands gathered around Sky Tower as fireworks exploded from the top of the 328-meter (1,076-foot) structure. Across this nation in the southern hemisphere, thousands took to beaches and streets for the first large-scale celebrations to welcome 2019.

Fireworks boomed and crackled above city centers and harbors.

Kiribati: The first country to enter the new year

The Pacific island nation of Kiribati was the first in the world to enter the new year, greeting 2019 with muted celebrations after spending 2018 on the front lines of the battle against climate change.

Kiribati is made up of low-lying atolls along the equator which intersect three time zones, the first of which sees the new year arrive 14 hours before midnight in London.

Much of the nation’s land mass, occupied by 110,000 people, is endangered by rising seas which have inundated coastal villages. The rising oceans have turned fresh water sources brackish, imperiling communities and raising doubts about the nation’s future.

The new year was welcomed in the capital, Tarawa, with church services and mostly quiet private celebrations.