WASHINGTON D.C. (WDEF) – The National Labor Relations Board has stopped a union vote at the Volkswagen Chattanooga plant, at least for now.

In April, the UAW got enough petitions from workers to request a unionizing vote at the plant by the end of April.

But the company responded that they were opposed to a union vote until the NLRB settled other labors questions first.

As they said in their petition “Volkswagen is not opposed to elections—as its history
strongly supports—rather, the issue is a Board procedural one.”

We’ve been waiting now for a few weeks now for the NLRB to pick a date for the vote.

On Friday, the Board voted 2-1 to stay the proceedings.

They also sent the question of an early unfair labor practices ruling against Volkswagen back to the regional NLRB. Presumably this will have to be resolved before any new vote can take place.

You might wonder why there has been so much legal wrangling over picking a date to vote.

Labor law attorneys point out that quick votes often go to the union, while delayed ones favor the company.

Back in early April, the UAW had at least 30% backing of the workers on petitions to call for a vote.  And they stressed their desire for a quick one.

But in the last week, we’ve seen some anti-union activity emerge at the plant.

Governor Bill Lee addressed workers in a closed door session where he expressed his preference for no union.

And a worker group that opposed the UAW in 2014, reformed this week.

Their group, Southern Momentum, issued this statement on today’s ruling.

“This is a victory for Volkswagen workers,” said Tom Haney, a team member at the Volkswagen Chattanooga facility. “We will continue to educate our colleagues on the negative impact the UAW would have on our factory and remain confident that if another election occurs in the future, workers will vote no and soundly reject the UAW.”

“We could not be more pleased with this decision and are glad the regional director halted the UAW’s attempt to push through a quick election before workers had the opportunity to mobilize and make their voices heard,” said Maury Nicely, a Chattanooga-based lawyer for Evans Harrison Hackett PLC, who represented Southern Momentum in 2014. “Clearly the UAW’s attempt to disavow its own supporters in a dues- and-membership grabbing ploy backfired. If I have said it once, I’ll say it a thousand times: the UAW was wrong for Chattanooga and Volkswagen in 2014 and it is wrong for us today.”

“Chattanooga workers deserve the right to vote and have bargaining rights just like every other VW worker in the world,” UAW International spokesperson Brian Rothenberg said in a statement. 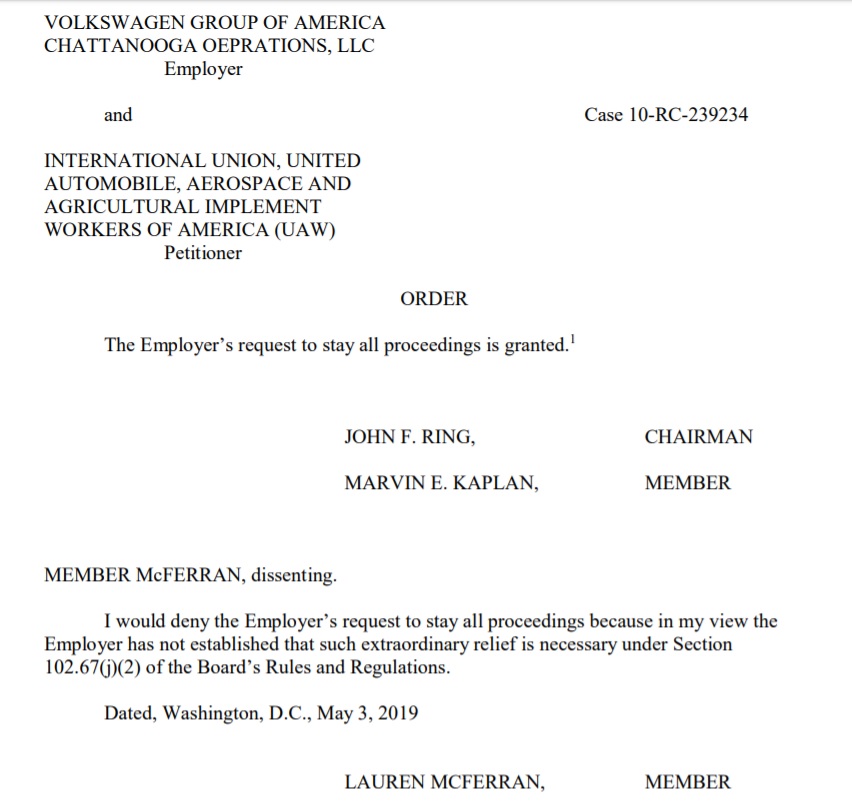