“Not how you treat the press,” says producer held in Venezuela

Maria Martina-Guzman, one of Univision’s executive producers who was detained earlier this week along with anchor Jorge Ramos and five others by the Venezuelan government in Caracas, told CBSN that she feels outraged and robbed of her work. She described how they were put in a “dark room” and about $180,000 worth of equipment was “stolen,” since she said none of it has been returned as of Thursday, including their interview footage.

Ramos and his crew, including Martinez-Guzman and several camerapeople, were interviewing the country’s embattled President Nicolás Maduro at the Miraflores presidential palace about the instability in the country, but things went south 17 minutes into their conversation after he showed Maduro footage of Venezuelan youths eating from a garbage truck.

“What triggered Maduro to just get up from the interview was when Jorge actually showed him video that was taken the day before of two young men who were eating from a garbage truck,” Martinez-Guzman told CBSN. “Up to the moment that Jorge showed him the video, [Maduro] had denied that was every happening in Caracas.”

In this framegrab of video provided by Univision, anchor Jorge Ramos is seen using a cellphone to record Venezuelan youths with food foraged from a trash truck near Caracas. Univision

Martinez-Guzman explained that video, shot on Ramos’ cellphone, had made it out of Venezuela because it was fed to Univision and broadcast prior to them being detained. She said the footage was shot nearby the hotel where the crew was located, which she said is “not in a bad part of town” and “two blocks away from the most exclusive part of Caracas.”

When the interview stopped, Martinez-Guzman said she got into an argument with Venezuelan officials at Miraflores.

“That they didn’t authorize this type of interview, to this day we don’t know what they meant,” she told CBSN. “I had got into an argument with the person who threw Jorge Ramos out of the room … I said you can’t treat us like that, we are free press, this is not how you treat the press. This is journalism.”

“For us the scariest moment: We were there among 15 security forces. It was a relatively small room … we refused to turn over our cellphones,” Martinez-Guzman said. “I was able to get a call out to our president of news and that’s why the ball started to get rolling so fast with the State Department.” 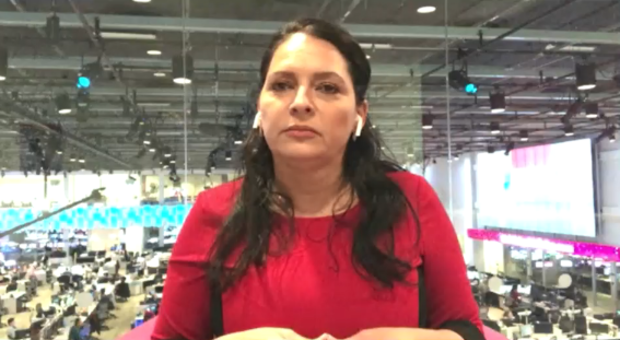 Martinez-Guzman said the room’s lights were turned off.

“We couldn’t see who approached us from behind … who took our backpacks … at that point it was the only time they asked for a woman to come so she could search me,” she explained. “She stuck her hand inside my bra, inside my pants, to make sure I didn’t have anything on me … to see if I had taken anything out of Miraflores.”

The country has been grappling with a collapsing economy and widespread food and medicine shortages for years.

“What it tells me is that it’s a dictatorship,” Martinez-Guzman said. “Ramos ended the interview with the perfect phrase: ‘This is not a democracy … a dictator does what you [Maduro] were doing.”

She said if the Univision crew does get their interview footage back, the world can determine what kind of interview it was.

Since Ramos became Univision’s chief anchor in 1987, he and his newscast have become a TV staple in Hispanic households in the U.S. He received signifcant coverage in the English-language press when he was ejected from a Iowa campaign event in 2015 after sparing with then-presidential candidate Donald Trump over immigration.

After being freed, Ramos said he and his crew returned to their hotel Monday. He noted at the time was still being supervised by Venezuelan police.

Camilo Montoya-Galvez contributed to this report.