“Now or never” for nude fine dining in Paris

The first nudist restaurant in the French capital is being forced to close because it cannot put enough bums in seats. O’Naturel will draw the curtain on nude fine dining in Paris in February after a little over a year, despite rave reviews from diners who shed their clothes to slurp oysters and feast on snails, foie gras and asparagus.

But to avoid financial embarrassment, twins Mike and Stephane Saada said they were having to close. “It is now or never,” they urged the curious “wanting to experience a last nude dinner in Paris” before they bring down the shutters on Feb. 16.

“We are counting on you to support us,” they wrote on Facebook. “We thank everyone for taking part in this adventure. We will only remember the good moments and the great people we met.”

The restaurant in the east of Paris opened amid a blaze of publicity in November 2017. Clothes must be left in the cloakroom along with mobile phones to prevent people from sneaking a photo of other customers.

Diners eat in the nude at the nudist restaurant O’Naturel in Paris on Dec. 5, 2017. Geoffroy Van Der Hasselt/AFP/Getty Images

The diners are then provided with slippers although women — who make up 40 percent of the clientele, according to the managers — may keep their heels on. O’Naturel — a play on the French phrase for “naked” — was seen as a sign that naturism was becoming ever more mainstream in a country which is the world’s top destination for nude tourism.

Unlike the nude London restaurant The Bunyadi, which opened briefly in 2016, the Saada brothers keep their clothes on as they serve customers. “Our role is to put people at ease,” said Stephane, who insisted French law demanded they stay dressed.

“As soon as customers enter the dining room, we accompany them to their table and we reassure them that it’s not like the whole room is looking at them,” he told AFP after it opened. The restaurant’s black chair covers are discreetly changed between sittings, with diners shielded from prying eyes outside by a heavy white curtain. 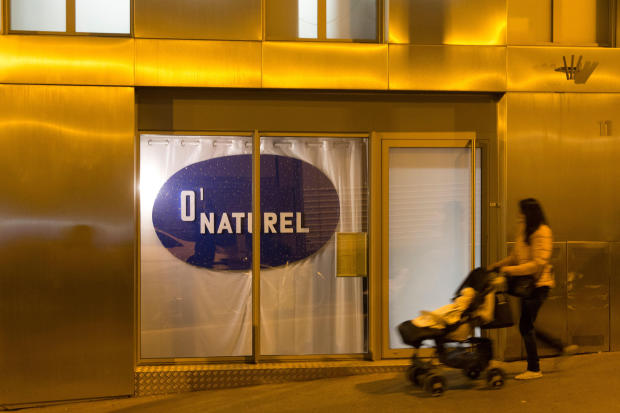 A woman pushes a stroller past the nudist restaurant O’Naturel” in Paris on Dec. 5, 2017. Geoffroy Van Der Hasselt/AFP/Getty Images

While news of the closure sent a chill through the French naturist world, campaigner Cedric Amato said the restaurant was ahead of its time. “It may have been a little early” for an all year round nudist establishment in Paris, he told AFP.

“I ate there many times and it was very good,” but the fact that it was in a residential area and did not have a terrace for good weather counted against it, he said.