Frontier can perform more than a quintillion calculations per second... that's a 1 followed by 18 zeroes 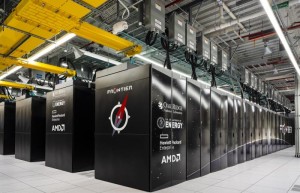 Frontier’s deployment adds to ORNL’s nearly 20-year tradition of supercomputing excellence alongside predecessors Jaguar, Titan and Summit – each the world’s fastest computer in its time.

OAK RIDGE, Tennessee (WDEF) – The fastest supercomputer in the world is humming along right now in East Tennessee.

The Oak Ridge National Laboratory celebrated the debut of Frontier on Wednesday.

Federal officials along with Congressman Chuck Fleischmann were at the event today.

They call Frontier’s debut as the dawn of the exascale computing era.

So how fast is it?

Frontier can perform more than a quintillion calculations per second, making it the fastest in the world and the first to achieve “exascale.”

Deputy Secretary of Energy David Turk says “Research that might once have taken weeks to complete, Frontier will tear through in hours, even seconds.

“Oak Ridge has positioned the United States to lead the world in solving massive scientific challenges across the board.”

The supercomputer will tackle all kinds of scientific problems.

General Electric hopes it will help them revolutionize the future of flight with hydrogen propulsion and hybrid electric technologies.