Five California officers have been cleared of criminal charges in the fatal Taser encounter with an unarmed man in Millbrae last year, a district attorney announced Friday. Video of the incident was also expected to be made public Friday afternoon. The decision by San Mateo County District Attorney Steve Wagstaffe comes in the wake of public outcry over the death of Chinedu Okobi, concern over multiple fatal Taser incidents in San Mateo County and mounting calls for the video’s release.

Speaking Friday, Wagstaffe called the case a “horrible tragedy” and said he wasn’t aiming to blame Okobi. He said his investigation found that the officers’ actions were lawful under the California penal code.

Okobi, 36, was unarmed when he died Oct. 3 after being tasered during the encounter with four San Mateo County Sheriff’s deputies and a sheriff’s sergeant. One of the deputies discharged the Taser, Wagstaffe said.

A statement at the time from the sheriff’s office said a deputy first approached him because he was “running in and out of traffic,” and that he “immediately assaulted an officer,” who called for backup. It says Okobi struggled with responding officers and was taken into custody and transported to the hospital, where he died. But Okobi’s sister, Ebele Okobi,  said she’s seen the video — including dashcam, cellphone and surveillance video — and it contradicts that account. Ebele Okobi, who is the director of public policy for Africa for Facebook, says the video shows her brother calmly walking on the sidewalk and never shows him assaulting an officer.

Ebele Okobi says that while her brother struggled with mental illness, the video shows that played no role in his death. 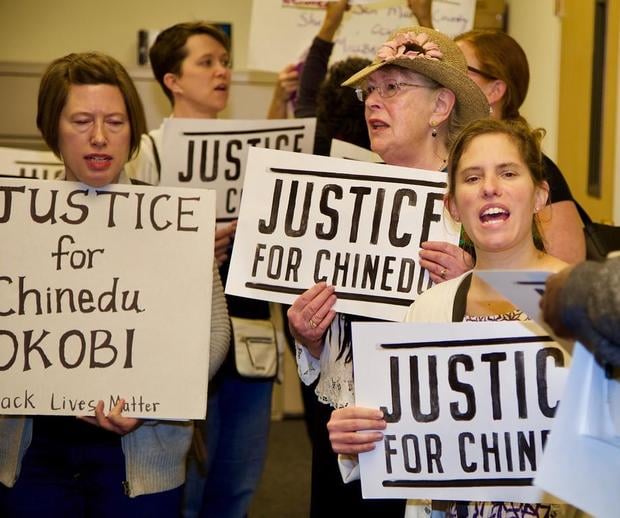 In a Facebook post in October, Ebele Okobi described the videos as “shocking.” She says they show her brother dying and no one attempting to help him. “There is no mercy or compassion for my little brother,” Ebele Okobi, who lives in London, wrote in a Facebook post. “If they had killed a dog the way they killed my brother, there would be outrage.”

Ebele Okobi, along with community activists, have accused the sheriff’s office and Wagstaffe of releasing misinformation. They’ve also said Wagstaffe has delayed releasing the video. Wagstaffe initially said he planned to release the video in December, but then said he had hired a use-of-force expert and was awaiting his report.

Okobi’s was the third death in the span of 10 months involving Tasers and law enforcement in San Mateo, a Bay Area county. Family members and activists have called for a temporary halt on the use of the devices, which fire probes that deliver a pulsed current to temporarily incapacitate a person. The county board of supervisors last month held a public study session to learn more about the devices and local policies governing their use.

Community activists planned to gather Friday to call for a moratorium on Taser use in San Mateo county, an investigation into Okobi’s death by the California Attorney General Xavier Becerra, and an establishment of a permanent civilian oversight committee to review the actions of the San Mateo Sheriff’s Office.