Portland: Race Against the Past

The “OK” hand gesture has been added to an expanding list of hate symbols used by white supremacists. The Anti-Defamation League announced dozens of new additions to its database on Thursday.

The hand symbol began as a hoax by users of the website 4chan before turning into a popular trolling tactic, according to the Anti-Defamation League. By this year, it had evolved into a gesture embraced “in some circles as a sincere expression of white supremacy,” the civil rights group said.

The suspect in the New Zealand massacre last March flashed the symbol during his court appearance in March after being arrested for the shooting deaths of 51 people at mosques in Christchurch.

Among the other new entires is the “bowlcut,” which is an image of a bowl-shaped haircut resembling the one worn by Charleston church gunman Dylann Roof. He was convicted of fatally shooting nine African American parishoners in 2015, and has been sentenced to death.

A far-right demonstrator makes the “OK” hand gesture, believed to have white supremacist connotations, during a rally on August 17, 2019, in Portland, Oregon.  John Rudoff / AFP/Getty Images

Many of the newly added symbols have appeared at white supremacist events such as the “Unite the Right” rally in Charlottesville, and were painted on guns used by the Christchurch shooter, according to the Anti-Defamation League. The slogans and symbols have emerged online on platforms such as 4chan, 8chan and Reddit before moving onto mainstream social media sites like Twitter and Facebook or even gaming platforms.

“These are the latest calling cards of hate,” said Mark Pitcavage, senior fellow at the Anti-Defamation League’s Center on Extremism. “While some hate symbols are short-lived, others take on a life of their own and become tools for online trolling.

“We pay special attention to those symbols that exhibit staying power as well as those that move from online usage into the real world,” he added.

The Anti-Defamation League created the database in 2000 to help track hate groups and aid law enforcement, educators and the public in recognizing symbols that serve as a warning to the presence of extremists, white supremacists and anti-Semites.

“We believe law enforcement and the public needs to be fully informed about the meaning of these images, which can serve as a first warning sign to the presence of haters in a community or school,” said Jonathan Greenblatt, Anti-Defamation League CEO. 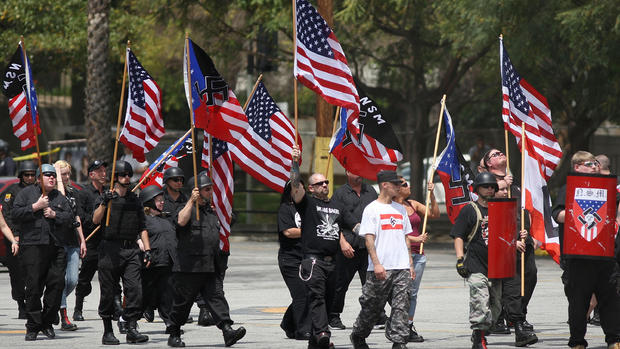