A woman posted on Facebook pleading for help on finding a man that pulled her and a friend out of a window when the Easter Tornado hit.

Today she found that man.

An Ooltewah woman has been on the search for a man that pulled her and a friend out of a window when the Easter Tornado hit.

When the tornado hit, Hilary Colorado and her family were inside the mobile home that had been lifted up off the ground.

That night, a man had stopped by the Auburn Hills Mobile home park with his son to find shelter from the tornado, that’s when he and his son helped rescue Colorado and a friend out of a window.

“He saved us from getting out of the trailer, he carried our children to the church when you know, we could barely carry ourselves up there because we were exhausted already.” 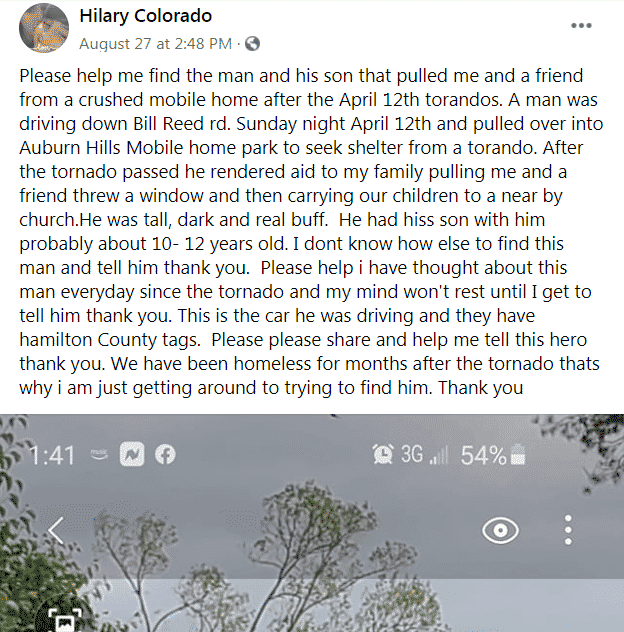 Now, after months of dealing with the loss of home and property, Colorado posted on Facebook hoping to find the man who stepped in.

“Now I’m stable, I’m back in a home, we just bought a home, now I really want to find him, before I was overcoming a lot of mental and emotional distress from this tornado and losing everything and now that I’m finally stable again I thought it was time to find him again and tell him thank you.”

The post got over two hundred shares and Tuesday afternoon, Colorado was able to find that man….

“I wanted to cry, I had tears in my eyes, it was overwhelming, I couldn’t believe we finally found him, I posted that on Facebook thinking were probably not going to find him, it’s like finding a needle in a haystack, but I was wrong.”

Colorado says she is anticipating meeting the man on Thursday.

“I’m probably going to cry, but I’m going to tell him thank you so much that he does not, he can’t even fathom how much he means to us and how he impacted our lives that day.”

Colorado says the aftermath of the tornado was like hitting rock bottom.

But months later, because of her family and friends support, she says she got through it.

Details on how to get at-home Covid tests