Out of the Darkness Walk Raises Awareness about Suicide Prevention 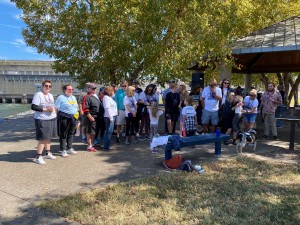 Participants gather at the Out of the Darkness Walk to raise awareness for suicide prevention.

Author’s Note: This article discusses the topic of suicide. If you or someone you know needs help, please call the National Suicide and Crisis Lifeline at 988.

For some however, they may feel that there is no more hope to be had. The American Foundation for Suicide Prevention is hoping to reach those people through their annual Out of the Darkness Walk. This year’s edition at the Tennessee Riverpark on Sunday was the 18th held in Chattanooga and was attended by around 160 participants.

Meghan Gwaltney, our area’s director for The American Foundation for Suicide Prevention, said this event has a deep purpose. Gwaltney explained that, “The event that was founded by a community member several years ago in memory of her brother who died by suicide. It’s a really incredible event that we host every single year that is a gathering of those who have lost someone to suicide, those who might be struggling with their mental health, and then just some mental health advocates who want to be out here supporting those in showing that it is okay to talk about suicide.”

The event was supported by organizations such as EPB, the Chattanooga chapter of the National Alliance on Mental Illness (NAMI) , and the Tennessee Suicide Prevention Network. There were also local artists who came out to share how the value of life inspires them to create.

One such artist uses an unusual method to make jewelry with a message. A decade ago, Christinea Beane founded her jewelry company, Makes Cents Jewelry, from the idea of using copper from pennies, an item most regard as completely worthless. Beane however sees the value of a penny as she gave her fascinating worldview of how she connects the penny to a human life.

Beane said that, “I had started Make Cents Jewelry as a hobby to explain why I believe a penny is a metaphor for everything in life. It’s to bring hope and encouragement to somebody who felt like they did not feel as though they did not have any significance… When you dig a little deeper, you see the rejection most people see. The “it’s worthless, it shouldn’t be made, it costs too much”. You’ll see people reject it as it’s inanimate and throw it away. Its Identity when it was made of steel, and even evolution as the penny changed over time so ultimately there is that value there.”

That value is priceless, and the American Foundation for Suicide Prevention hopes that by having more open conversations about this topic, we can convince others that their life is highly valuable.

Meghan Gwaltney summed up the afternoon by stating, “Suicide is still highly stigmatized in our society and to lose someone by suicide often means that the survivor experiences feelings of guilt or shame and it can be incredibly isolating. I’ve heard it again and again from walkers, they come to this event and it might be the first time they’ve encountered another walker and they’ve realized that they’re not the only one who have experienced this loss and that is the beauty of this event is showing people that you are not alone and that there are others who understand exactly what you’ve gone through.”