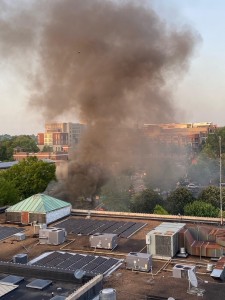 Photo from hotel guest at the Courtyard by Mariott.

EPB says they have now restored all fiber optics service, too from last night’s transformer explosion.

They now say it was caused by an equipment failure in an underground electrical vault, but they can’t determine exactly what caused it.

CHATTANOOGA, Tenn. (WDEF)- EPB has announced that they have restored the vast majority of power in downtown Chattanooga as of 7 AM this Wednesday morning, June 15. The only building at this time that still has no power is the Ben and Jerry’s building on Broad Street. That building is located right next to where the underground transformer exploded after a fire shortly after 8 PM Tuesday evening, June 14.

Fiber Optics services have been restored to about 70% of customers who lost it due to the explosion, and EPB crews are working quickly to restore it to the remaining outages. Approximately 500 customers lost power and other services due to the incident last night, which came during the ongoing heatwave being experienced in the Tennessee Valley.

EPB said that the fire and subsequent explosion were caused by an equipment failure in an underground electrical vault. They did add that there is no way to determine what caused that failure.

More To The Story with Staley: Electric Truck