“This is not about freedom” is a phrase that should never come out of a U.S. President’s mouth.
For a fight that requires working together, a lot of cynical and divisive edicts came out of the White House today pitting the vaccinated against the unvaccinated, businesses against employees, and the federal government against states.
The Constitution won’t allow this power grab, and in the meantime, I will stand up for all Tennesseans.
To be clear: the vaccine is the best tool we have to combat the pandemic but heavy-handed mandates are the wrong approach.

WASHINGTON (AP) – President Joe Biden has announced sweeping new federal vaccine requirements affecting as many as 100 million Americans in an all-out effort to increase COVID-19 vaccinations and curb the surging delta variant. The government’s expansive new rules, announced Thursday, mandate that all employers with more than 100 workers require them to be vaccinated or test for the virus weekly, affecting about 80 million Americans. Biden is also signing an executive order requiring vaccination for all employees of the executive branch and contractors who do business with the federal government. No testing opt-out is expected to be included for the executive branch requirement.

Republican Southern Governors were quick to respond to the President’s announcement.

Georgia Governor Brian Kemp is threatening to take the administration to court.

Here is her statement: 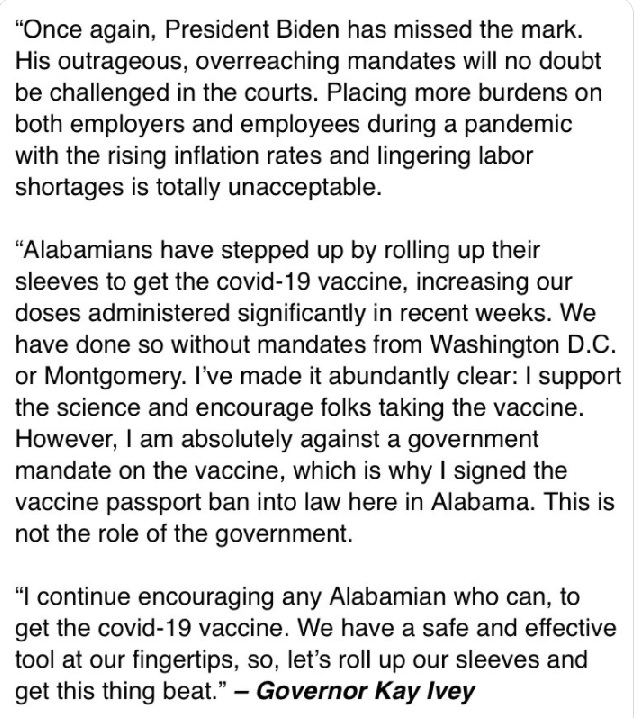