This June 21, 2018, photo shows an airman holding a coffee cup at Travis Air Force Base.

Sen. Chuck Grassley, R-Iowa, wants the Air Force to explain why a squadron at California’s Travis Air Force Base is buying metal coffee cups that cost $1,280 each.

Grassley cited a recent Fox News report that found the 60th Ariel Port Squadron had spent a total of nearly $56,000 in the past three years, because the cups’ handles break easily when dropped.

In a letter addressed to Air Force Secretary Heather Wilson, Grassley called the report an example of “reckless spending of taxpayer dollars” within the Defense Department, and said he doubts the Air Force is taking  “real steps” to reduce wasteful spending. 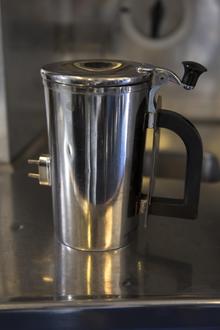 A hot cup sits on a counter at Travis Air Force Base in California on June 21, 2018.

“Every dollar that is spent on overpriced spare parts or replacement hot cups is a dollar that should have been spent on ensuring our national defense,” he added. “As Congress looks to authorize future defense spending, it is important to understand how the money is being spent, and why.”

Grassley asked if there are cheaper options available and if the coffee cups are truly necessary considering the price. The squadron reportedly uses the cups because they can reheat beverages on air refueling tankers during flights.

Earlier this year, Grassley demanded the Air Force explain why it was spending $14,000 on individual toilet seat covers. He said he has yet to receive “satisfactory answers” to his questions about the expensive covers.