A catastrophic and deadly volcano eruption in Guatemala is affecting more than a million people. The “Volcan de Fuego,” or “volcano of fire,” exploded just before noon on Sunday. At least 25 people were confirmed dead as of early Monday morning, and authorities said an undetermined number were still missing, potentially trapped beneath thick ash.

The blast belched thick black smoke over an area extending all the way to the capital, Guatemala City, about 30 miles away. More than 3,000 people have been evacuated, and Guatemala’s president called for a state of emergency to be declared on Sunday night.

Rescue operations resumed Monday morning after being suspended overnight due to the dangerous conditions. People living in villages near the volcano didn’t have much time or warning to escape the lava flow, reports CBS News correspondent Don Dahler.

A volunteer firefighter carries a child after the eruption of the Fuego Volcano, in El Rodeo village, Escuintla department, south of Guatemala City, June 3, 2018.

The devastation from Volcan de Fuego was unrelenting. As hot molten lava flowed from the volcano’s banks into small towns, people scrambled to escape. For many, it was too late. The charred bodies of several victims were strewn lifeless on the ground.

Thick black and gray ash blanketed entire towns. Hundreds of rescue workers rushed in to try to tend to the badly injured and help anyone still alive, but they struggled to reach some of the rural villages.

“The firemen say they can hear people screaming, but they can’t go to help them because the mud is blocking the roads,” AP correspondent Sonia Perez said from one of the hardest hit areas.

“Not everyone from my family escaped,” said Consuelo Hernandez, who fled up a hillside as the lava advanced. She said others didn’t make it and were likely buried behind her. 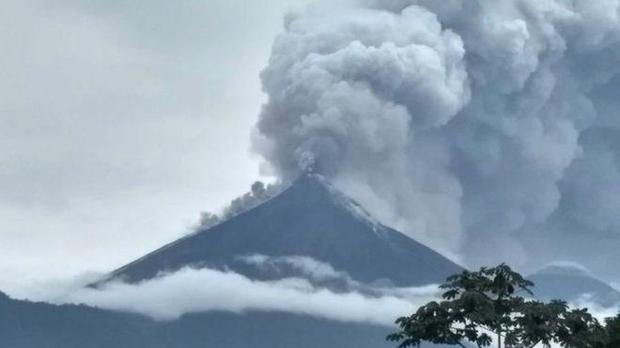 Bystanders recording video on their cell phones caught the moment that a high-rising volcanic mudflow destroyed a highway bridge. They bolted as the molten rock drew closer.

Government officials hesitated to call for evacuations when the eruption began. They waited until lava began flowing down the volcano’s banks to urge people to leave — about four hours after the initial blast.

The Fuego volcano is one of the most active in Central America. This eruption spewed ash and rock more than 32,000 feet into the air. Sunday’s blast was the volcano’s second this year, but its most violent in more than 40 years, and the danger is not over. Officials fear the death toll will rise because so many homes are difficult to access.

The country is already receiving help from other nations with deliveries of food, blankets and medicine.