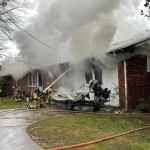 A fire significantly damaged part of a home on Mary Dupre Dr. Saturday afternoon. The Chattanooga Fire Department responded to a reported residential fire at 1 p.m. in the 1600 block.Firefighters arriving on the scene reported that heavy fire and smoke were visible from one end of the structure. Crews immediately began attacking the fire and got it knocked down so they could go inside to perform a search. No one was found inside. The residents were not home. Green Shift companies continued fighting the fire and had it under control in approximately 35 minutes. Firefighters then conducted salvage and overhaul and a fire investigator was called to the scene to determine what caused the blaze. The American Red Cross was contacted to assist the residents. There were no injuries. Quint 8, Ladder 7, Squad 7, Squad 13, Quint 6, Quint 21 and the Battalion Chief for District 2 responded.