Return to “The Twilight Zone”

You can’t hear its unmistakable theme music without flashing back to “The Twilight Zone,” which ran on CBS from 1959 to 1964. It was an anthology show of science fiction, horror and fantasy, graced by such future stars as Robert Redford, Robert Duvall, Carol Burnett and William Shatner. And you can’t think of “The Twilight Zone” without thinking of Rod Serling, the man who created and hosted it.

What you may not remember is that “The Twilight Zone” wasn’t exactly a hit. In a 1970 interview, Serling described the early reaction to the show: “You have to gauge that in the strange arithmetic of television, which is very close to insanity. I think in its best run, ‘Twilight Zone’ got roughly a 31-32 share, which in television terms, says that it is a mild success. It is not a runaway hit, it’s not ‘Gunsmoke,’ and it’s a very questionable item as to whether we’ll renew it,” he said.

James Poniewozik, the chief television critic for The New York Times, noted that Serling’s entire career was a story of run-ins with sponsors, networks, and corporate censors.

“There was a concept in television, of the old sort of three-network age, that was called the Least Objectionable Program,” said Poniewozik. “The best kind of programming was something that was inoffensive, that didn’t make people want turn the TV off.”

Serling’s screenplays wound up addressing controversial social issues, by disguising them. “He would use terror of aliens to stand in for McCarthyism, for conformity in American society, for fear of ‘The Other,'” said Poniewozik. “And the network people didn’t understand what he was doing, but he was able to get a point across in a lot of the ‘Twilight Zones’ by using UFOs and aliens.”

Correspondent David Pogue asked Jodi Serling, Rod’s daughter, about the man most people knew as the guy in the suit with the cigarette introducing each episode.

“My dad was the funniest person in the world,” she said. “He would dress the animals up in human clothes, and talk for the animals, and put lamps on his head.”

“Did that reflect at all in his parenting? I mean, was he around?”

“When he was in his study and the door was shut, we knew that that was off-limits. But most of the time he was open to talk to us when we wanted to talk to him or play with him. I never felt he was ever absent in my life at all.”

Serling enlisted in the Army immediately after high school, when World War II was in full swing. He was a paratrooper in the Pacific, a shattering experience that, his family says, haunted him for the rest of his life.

“My mom said that lots of times he’d wake up sweating, thinking he was back in the fields and everything,” said Jodi.

Pogue asked, “Is it too simple to say that some of the episodes that we know were your dad trying to work out [his experiences]?” 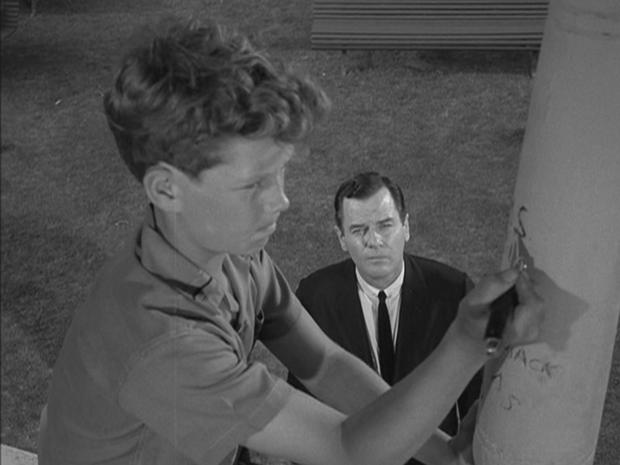 In the episode “Walking Distance,” Gig Young travels back in time to his hometown, and meets himself as a child. CBS

“Oh, yeah, it was cathartic, definitely, for him.”

“Walking Distance,” starring Gig Young, is one of the most personal episodes Serling wrote. It’s about a man who returns to the idyllic town of his boyhood (inspired by Serling’s hometown of Binghamton, N.Y.), and finds it frozen in time as it was back then.

It features a carousel, which still runs today in Binghamton, now with commemorative portraits.

“He loved Binghamton; this is where his childhood was,” said Jodi. “And when he came back after the war, his dad had passed. He wished he could turn time back and see his dad again. And that’s what prompted him to write ‘Walking Distance.'” 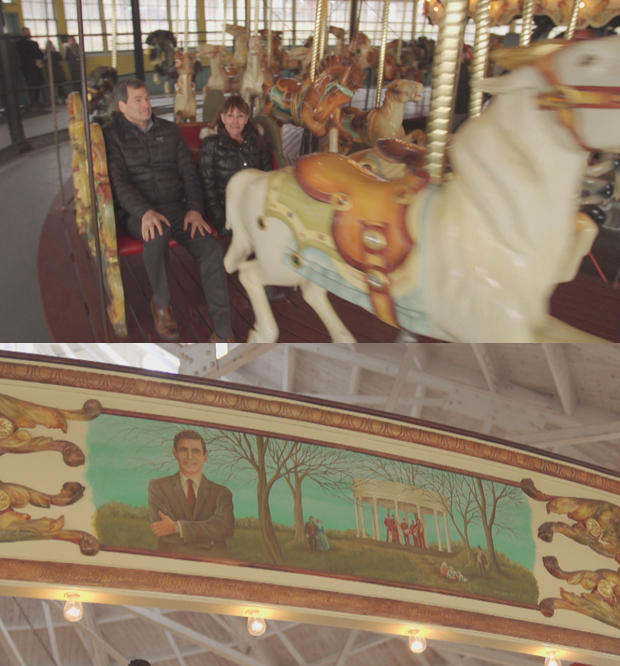 As a TV series, “Twilight Zone” has been resurrected three times. Once in the 1980s, once in the 2000s, and once starting tomorrow. Its executive producer is Jordan Peele, who wrote and directed the Oscar-winning movie “Get Out” in 2017, and the new horror movie “Us,” which is in theaters now.

“We were tasked with this sort of near-impossible feat of following in the footsteps of the greatest show of all time,” Peele said. 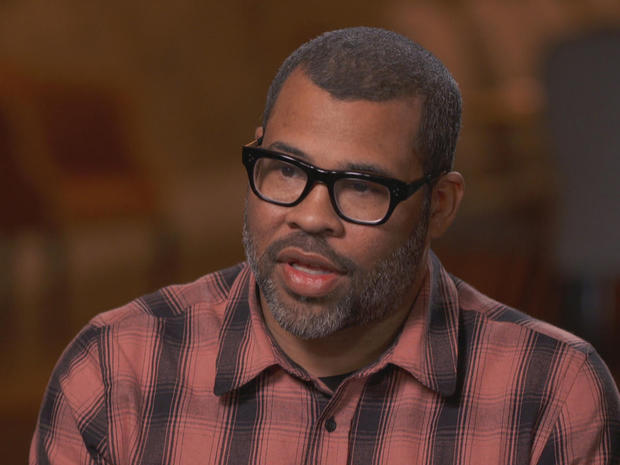 “People have said that you are a natural choice for this project because Serling also served up helpings of social justice,” said Pogue.

What elements of the original have been kept?  “Serling and the other writers, they built in reveals, and obviously they built in twists,” Peele said. “There’s always this, we call it the Serling wink, this sense that something sort of mischievous is at play.

“And then lastly, the power of parable, this notion that when an audience is brought into an engaging story and sets their imagination going, that they’ll be left afterward to think about what it’s about.”

Peele introduces each episode on camera, just as Serling always did, minus the cigarettes. Serling’s four-pack-a-day habit, 14-hour work days, and an inherited cardiac weakness eventually took their toll, in the form of three successive heart attacks. He underwent open-heart surgery, but died in the hospital, at age 50.

“He had a fear of his own mortality,” said Jodi. “I think he knew that he was gonna not make it.”

The days of heavy network censorship are gone now. So, is there any need today for “Twilight Zone’s” trick of delivering social commentary through storytelling?

“I think there’s always a need for good allegorical storytelling that kind of gets at the demons that, you know, maybe you’re allowed to talk about but people don’t necessarily like to talk about,” said TV critic James Poniewozik.

In the meantime, the Serling family is happy to hand over the reins to Jordan Peele. Jodi Serling said, “One of the things that my mom and I are really happy about is that he has the same social [consciousness] and feelings, and he’s also got a lot of humor in him. So, in a lot of ways he’s a lot like my dad. And we are honored to have him step in and continue the legacy, we really are.”

Peele said, If people hate me if I fail, then at least I will know I did it with the right purpose, and that’s trying to continue Serling’s mission.”

To watch a trailer for the new “Twilight Zone” click on the video player below.