A Russian court on Tuesday rejected an American man’s bid for release on bail and instead granted an extension to his detention pending a trial on espionage charges, according to Russia’s state-run Interfax news agency. Foreign Minister Sergei Lavrov said last week that Paul Whelan was caught “red handed” trying to recruit Russian nationals to provide intelligence to the U.S.

“The appeal of the defense (for release on bail) is not approved,” Judge Dmitry Pronyakin told Whelan in the court, through a translator.

The former U.S. Marine, who also holds a British passport, was in Russia for a friend’s wedding just before Christmas when he was arrested by the Russian special security services (FSB) and accused of espionage. His family has told CBS News they first learned of his detention through media reports. U.S. intelligence and State Department sources have told CBS News they’re confident Whelan is not a spy. His family also denies all the accusations against him.

The Russian lawyer representing Whelan in Moscow, Vladimir Zherebenkov, told CBS News correspondent Elizabeth Palmer outside the court on Tuesday before the hearing that the American was found at his hotel at the time of his arrest with a flash drive containing Russian “state secrets,” but he did not explain how Whelan came to be in possession of the information on the drive, and said his client was not aware that the material was considered sensitive by the Russian government.

“I’ve worked as an investigator for 20 years and if I do have a smoking gun, I will then put my strongest card on the table, to crush the opponent. In this case I don’t see any smoking gun,” Zherebenkov said after Tuesday’s hearing, adding that in his view, the prosecution, “don’t have strong evidence to back up the charges.”

The lawyer, a veteran of high-profile cases in Russian courts, cautioned however that given the diplomatic standoff between Russia and the U.S., Whelan’s case might not be straight forward.

“If we get politics in, it might be much harder. The judges will only see the political side and nothing else,” Zherebenkov said.

CBS News correspondent Elizabeth Palmer reports that although most of Tuesday’s hearing was held in secret — even the representative from the U.S. Embassy was not allowed in — reporters got their first glimpse of Whelan when all were invited in near the end of the proceedings to hear the judge’s decision.

Whelan, as is usual in Russian courts, stood behind glass in a kind of prisoner’s cage. Palmer says he looked relaxed. His Russian isn’t good enough to understand what was going on, so he had to be briefed by his lawyer and his translator.

Zherebenkov told Palmer that, as of Tuesday, he’d only seen a fraction of the state’s evidence against Whelan. He said he would appeal the no-bail decision but, if that fails, Whelan is looking at at least six more months in a Russian jail.

Paul Whelan, in the glass cage, an American charged with espionage, arrives for his trial at a court in Moscow, Russia, Jan. 22, 2019. Getty

Whelan’s detention quickly brought suspicion that Russia might try and use him in a prisoner exchange for a Russian national being held on spy charges in the U.S., possibly gun rights activist Maria Butina who pleaded guilty to acting as a foreign agent on Dec. 13.

Russia has dismissed any suggestion of a prisoner swap for Whelan and said Butina’s guilty plea was coerced under “torturous” conditions in a U.S. prison.

Over the weekend, Lavrov said it was “absolutely untrue” to suggest Russia was hoping for a prisoner exchange with Whelan: “We never practice these kinds of things. I repeat, he was caught red-handed.”

Whelan’s past and the Russian allegations

Since 2017, Whelan has worked for a Michigan-based auto parts company called BorgWarner, most recently as director of global security. He spent 14 years in the U.S. Marine Corps and was discharged in 2008 for bad conduct related to larceny, according to the military.

Secretary of State Mike Pompeo said earlier this month that the U.S. would demand Whelan’s immediate return if his detention is not deemed appropriate.

If found guilty of espionage, Whelan could face up to 20 years in prison under Russian law.

Whelan’s family has urged Congress to take action and ensure his release. U.S. Embassy staff in Moscow have visited the American and confirmed he’s safe, and Ambassador Jon Huntsman has also met with him in prison once.

“Our focus remains on ensuring that Paul is safe, well treated, has a good lawyer, and is coming home. We urge the U.S. Congress and the State Department to help on Paul’s behalf to secure his release and return him home soon,” the family said earlier this month.

Ambassador Huntsman met Whelan at the Lefortovo Detention Facility, and the prisoner’s family thanked him for staying in “regular contact” with Whelan and assuring his “rights will be respected.” 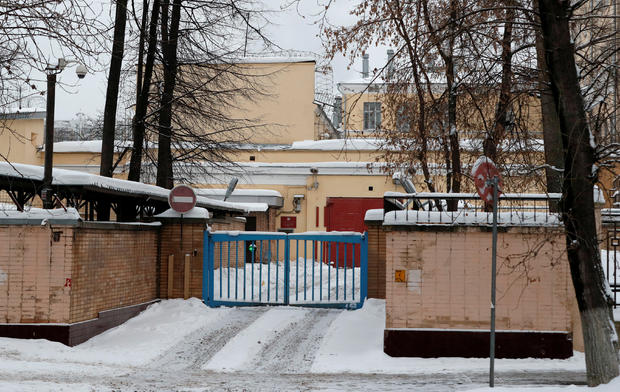 While the Russian government has given very little information publicly on the American’s detention, the country’s media outlets cited investigators last week as saying Whelan was caught “red-handed” after receiving “state secrets” from an unidentified Russian national.

According to the Rosbalt news outlet, which is thought to have exclusive sources via indirect links with the Kremlin, Whelan is accused of trying to recruit a long-time Russian acquaintance to gain a list of names of employees of a Russian security agency.

The news website said this week that that during his visit in December, Whelan acquired a list of Ministry Of Defence employees whose work relates to espionage. Rosblat said that was the information on the flash drive Whelan had at the time of his arrest at the Metropol Hotel in Moscow.

Rosbalt cited an anonymous source in Russia’s intelligence community as saying that Whelan had a profile on a Russian version of Facebook called VKontakte, where he would establish and foster contact with Russian nationals “targeted” for their presumed access to classified information.