“Saint Judy”: The story of a tireless immigration lawyer’s crusade for justice

In the new movie “Saint Judy,” the true story of a crusading immigration lawyer who used the courts to help make it easier for women to seek asylum, Golden Globe-nominated actress Michelle Monaghan – who has steamed up the screen with the likes of Tom Cruise (“Mission Impossible III”), Robert Downey Jr. (“Kiss Kiss Bang Bang”) and Matthew McConaughey (“True Detective”) –  plays a woman whose only romance is her character’s love of the law.

Correspondent Lee Cowan asked Monaghan, “What was it that popped out at you [about Judy Wood]?”

“Well, I guess her tenacity, first and foremost,” she replied.”

“Had you heard about Judy Wood before this whole project came along?”

“No. I hadn’t heard anything about Judy Wood, and I was quite nervous to meet her.”

“She’s a force to be reckoned with!”

At 72 she’s well-known in downtown L.A.; she’s been practicing immigration law there for more than 30 years. And yet, she denies the saintly title that some have bestowed on her: “Sometimes clients come in and they say, ‘Oh, we want you to save us.’ And I tell them, ‘I can’t save you, I’m not God, I’m just your lawyer.'” 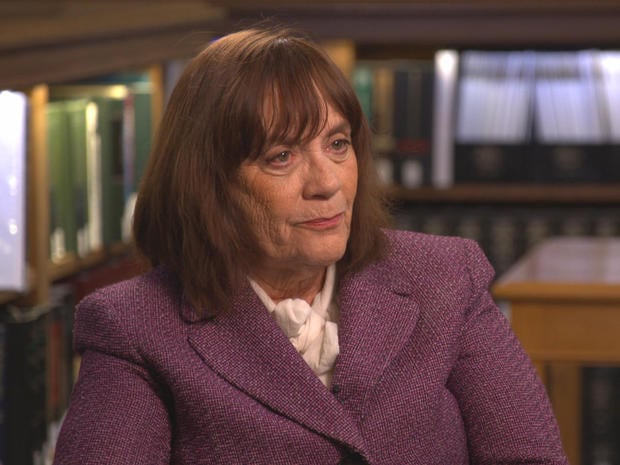 An angel to those for whom she fought in court, Judy Wood helped make it easier for women who faced persecution, or worse, to seek asylum in the U.S. CBS News

While she may not consider her work particularly angelic, those she’s helped find it hard to see otherwise.  “For me, Judy is an angel – she is my angel,” said Hilda Moalmi. After living in the U.S. for more than 20 years, Moalmi was about to be deported – ripped from her kids and her husband and sent back to Mexico.

“I honestly wanted to die,” she said, “because my family lives here, my kids live here, they wanted to take us away from our kids. Judy gave us back our life.”

Wood’s office handles some 6,000 immigration cases at any one time. Boxes and filing cabinets are overflowing with cases others refuse to take, said Wood’s associate attorney Greg Russel.

Cowan asked, “So, what makes her so good?”

“What makes her so good is I think, in my opinion, she’s a former actress,” Russel replied. “She has a flair for dramatic. She knows how to pull on the heartstrings of a judge.”

It’s a former intern of Woods who actually wrote the screenplay, basing it on the real case of a 39-year-old teacher from Afghanistan. She’d been imprisoned by the Taliban in the early ’90s, because she disagreed with its brand of fundamentalism, and taught young girls. She was kidnapped, beaten and tortured, before finally making it to the U.S. in hopes of being granted asylum.

But as the movie shows, a lower court ordered she be deported instead. Under the law at the time, women were not recognized as a protected class.

So, Judy Wood took the case to the 9th Circuit Court of Appeals in Pasadena. She told correspondent Lee Cowan that she was very nervous to argue the case, “but I was ready. I was definitely ready.”

Wood argued sending her client back to Afghanistan was almost a death sentence, especially because she was a woman: “Women go through a lot of tragedy, a lot of hardship. And it’s not the same kind of hardship that men go through. The persecution of women takes on this invasive nature, not only of their body, but their soul.”

The appellate court agreed, ruling there would be a “clear probability of persecution” if she were deported, and reversed the lower court’s ruling.

Since then, Wood has championed the causes of other women with similar harrowing tales all over the world.

“How big is the backlog of cases that are waiting?” asked Cowan.

“And how many of those cases involve women?

For Michelle Monaghan, the issue is clearly topical, but that doesn’t make the movie political. She said, “I think the timing of it makes it seem political. Oftentimes, you know, we make things political when they’re not, when they’re just truly of the heart. And it was her heart’s mission to do that.”

The one thing everybody says about Judy Wood is that she never gives up. Maybe she’s no saint, but she certainly seems to have found her calling.

“I think that, if you have faith, and you do what’s right, and you keep doing it, and you give your life to it, you will succeed,” she said. “You will change the nature of life on the planet. I really believe that.”

To watch a trailer for “Saint Judy,” click on the video player below.