Salmonella linked to dog treats that sickened 154 apparently over

A multi-state salmonella outbreak tied to pig-ear dog treats that sickened 154 people appears to be over, according to government health officials.

Both the U.S. Centers for Disease Control and Prevention and the U.S. Food and Drug Administration have dropped their warnings against purchasing the treats, other than those previously recalled.

Those stricken in the outbreak lived in 34 states and included 35 hospitalizations and 27 illnesses involving children under five, the CDC said on Wednesday. The illness first started in June 2015 and continued through the middle of last month, the agency said.

Contact with pig-ear pet treats from “many different suppliers” is the likely culprit in the outbreak, according to the CDC, which cited laboratory and other evidence.

The CDC and FDA as recently as last month were urging dog owners against buying or feeding any pig ears to their pets, while adding names of pet food manufacturers to the list of those recalling pig-ear dog treats tied to the outbreak.

Still, dog owners who opt to resume treating their pets to pig ears should take the following precautions, according to the CDC:

Wash your hands. Always wash your hands thoroughly with soap and water right after handling pig ear treats as well as other pet treats and pet food.

Keep kids safe. Keep pig ear treats away from children. Pick up treats when your pet is done with them.

Shop safely. Again, wash your hands thoroughly with soap and water after touching unpackaged dog food or treats, including products in bulk bins or on store shelves.

Wash containers, shelves, and areas that held any pig ears with hot, soapy water. Be sure to wash your hands after handling any of these items.

The now-lifted warning against the product came amid a string of recalls involving the dog snack. Dog Goods USA expanded a previous recall to include all 30-packs of Berkley & Jensen brand pig ears sold at BJ’s Wholesale Club stores. The company purchased the pig ears from a single supplier in Brazil from September 2018 through August 2019.

The Tobyhanna, Pennsylvania-based company last month recalled Chef Toby Pig Ears Treats sold nationwide after being contacted by the FDA, which tested pig ears from the company’s Brazilian supplier and found that one sample tested positive for salmonella, the company said in a recall notice posted by the FDA. (See a list of lot codes below.)

Bags of 8-count, 12-count, 25-count and 100-count pig ears were distributed across the country through Amazon.com, Chewy.com, Brutusandbarnaby.com and a physical store, Natures Food Patch, in Clearwater, the company said.

Consumers who purchased Brutus & Barnaby pig ears were urged to destroy any remaining product and to contact the place of purchase for a refund. Those with questions can call the company at (800) 489-0970 from Monday-Friday 9 a.m. to 5 p.m. Eastern Time. 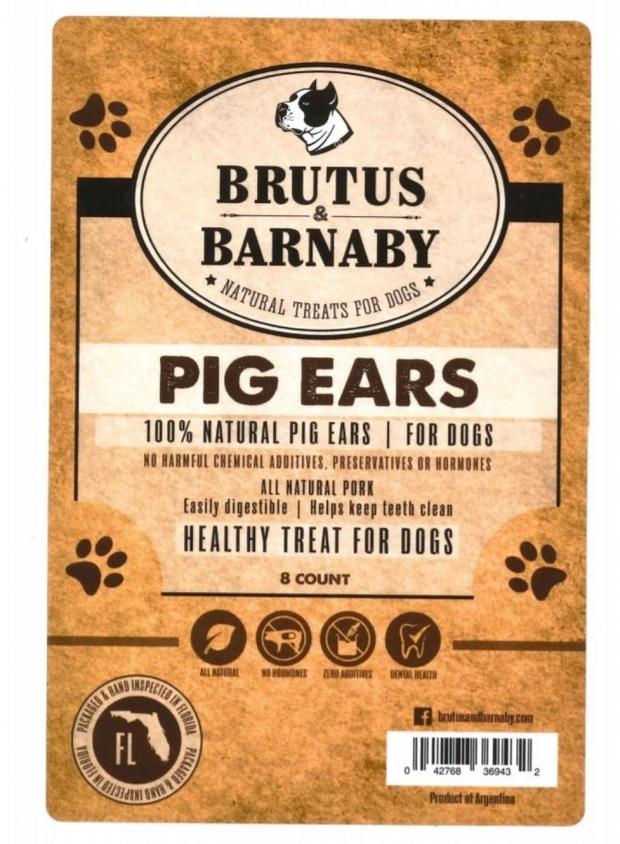 The recalls came amid an investigation by the FDA and the CDC that has now prompted five separate recalls and a general warning from the agencies against all pig-ear treats.

The warning extends to pig-ear dog treats already in homes, with the CDC warning that “handling these treats could make people sick; eating the treats could make dogs sick.” Tests have identified “many different strains in salmonella in pig ears from various brands and suppliers,” according to the agency.

The CDC added that data on where the ill consumers had bought pig ears has not identified a single supplier, distributor or common brand of pig ear treats.

Salmonella can affect animals eating contaminated products as well as the humans who handled the infected product or sickened animals. In people, the salmonella infection causes symptoms including nausea, vomiting, bloody diarrhea, abdominal cramping and fever. In rare cases, it can cause more serious ailments. Affected pets may become lethargic and have diarrhea, fever and vomiting.

States impacted by the outbreak

Consumers who have purchased the treats distributed by Dog Goods should return them to the place of purchase for a refund. Those with questions can call at (786) 401-6533 extension 8000 from 9 a.m. to 5 p.m. Eastern Time.