A century after Einstein’s equations predicted the existence of black holes, a virtual telescope the size of planet Earth has captured the first direct image of a black hole, or rather the mysterious region defined by the hole’s event horizon, the point beyond which nothing, not even light, can escape, astronomers announced Wednesday.

“We have seen what we thought was unseeable,” said Shep Doeleman, a radio astronomer at the Harvard Smithsonian Center for Astrophysics and director of the Event Horizon Telescope project. “We have seen, and taken a picture of, a black hole. This is a remarkable achievement.”

The target was an enormous black hole, 6.5 billion times more massive than the sun, in the core of M-87, a giant elliptical galaxy about 55 million light years away in the constellation Virgo. The black hole’s six-and-a-half billion solar masses are crammed into a region about the size of a solar system.

A familiar target for amateur astronomers, M-87 is one of the brightest radio sources in the sky, featuring a huge jet of material extending away from the core, powered by the voracious black hole.

The image captured by the Event Horizon Telescope shows a black central core — the event horizon — surrounded by a lopsided ring of light emitted by particles racing around the black hole at nearly the speed of light. It closely resembles what astronomers expected based on simulations running the equations of Einstein’s general theory of relativity.

“We now have visual evidence for a black hole,” Doeleman said. “We now know that a black hole that weighs 6.5 billion times what our sun does exists in the center of M-87. This is the strongest evidence we have to date for the existence of black holes. It is also consistent … with Einstein’s predictions.”

Daniel Marrone, an astronomer at the University of Arizona’s Steward Observatory said: “Today, general relativity has passed another crucial test. … The object at the heart of M-87 is a black hole like those described by general relativity.”

The long-awaited announcement was made simultaneously at multiple news conferences around the world by scientists participating in the Event Horizon Telescope project. The scale of the event was reminiscent of the announcements surrounding the discovery of the Higgs boson and the first detection of gravitational waves.

The globe-spanning network of radio dishes, atomic clocks and computers making up the Event Horizon Telescope also is expected to image Sagittarius A*, or Sgr A* for short, the supermassive black hole at the heart of the Milky Way.

Unlike the beast powering M-87, Sgr A* is a relatively modest 4.3-million-solar-mass black hole filling a volume smaller than Earth’s solar system. It is located 26,000 light years away in the core of the Milky Way, generating enormous gravitational effects that can be seen in the motions of nearby stars.

Those motions at the core of the galaxy have been studied for years, providing the mass of the hole along with other insights, but no one has actually viewed the black hole itself.

“Sgr A* is also a very interesting target,” Doeleman said. “We should be able to resolve it. M-87 is the first source we imaged. … We’re very excited to work on Sgr A*. We’re not promising anything, but we hope to get that soon.”

While black holes, by definition, cannot be seen, radiation produced by gas and dust as material is sucked in at enormous velocities and heated to extreme temperatures is visible across multiple wavelengths.

The M-87 images are the first direct views of a supermassive black hole, or rather the shadow of its event horizon, the boundary that defines where the normal universe ends and the unknowable begins. Anything that crosses the event horizon, be it a photon, atomic particle or astronaut, is forever lost to the known universe.

To see a black hole for the first time, the Event Horizon Telescope team used an array of radio telescopes in Hawaii, North, Central and South America, Europe and Antarctica.

Using a technique known as very long baseline interferometry, precisely timed data from each radio telescope can be combined to produce images comparable to what an Earth-size dish would see. The resulting virtual telescope has the highest resolution of any instrument ever built, capable of detecting an object the size of a doughnut on the moon.

Over a period of 10 days in April 2017, the EHT dishes collected about 65 hours of data. Those data filled scores of hard drives that were physically shipped to researchers in Europe and the United States for processing and analysis.

By imaging the immediate environment of M-87’s black hole, EHT astronomers hope to better understand Einstein’s theory of general relativity, which makes a variety of predictions about the behavior of black holes and the effects of extreme gravity on the fabric of spacetime.

Astronomers also hope to glean details of how material falls into black holes, forming what’s known as an accretion disk just outside the event horizon, and how that material behaves as it is accelerated to near lightspeed. They also hope to learn more about how titanic jets are generated at the poles of many black holes. 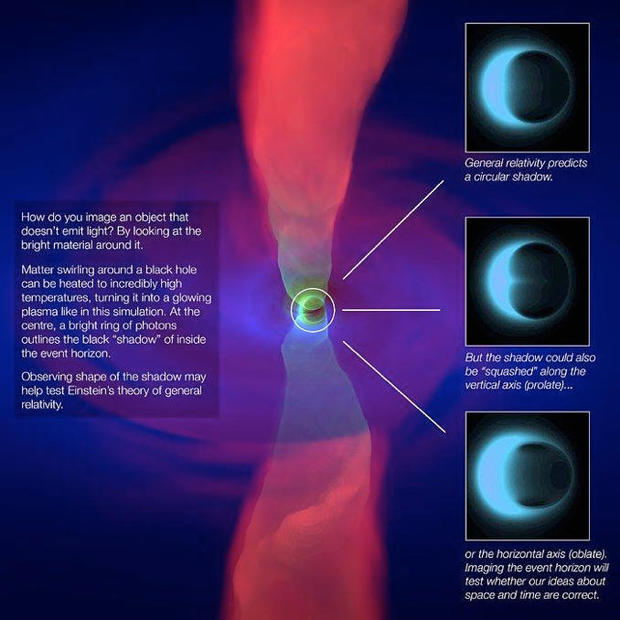 The concept of black holes

The accepted reality of black holes is relatively new, but the concept is not. John Mitchell, an English country parson and accomplished scientist, first suggested the possibility of “dark stars” in 1783.

Mitchell wondered what would happen if a star was so large, and its gravity so immense, that its escape velocity, that is, the speed an object — or a photon — would need to overcome the star’s gravitational field, exceeded the speed of light. He concluded the star would be invisible, or dark, because its light could not escape.

It was a remarkable application of Newton’s laws and while the modern concept of a black hole differs in many ways from Mitchell’s he had the right idea.

Einstein’s relativity equations predicted the inevitable existence of black holes in 1915, although the famous physicist initially did not believe such objects could be real. But in 1916, German astronomer Karl Schwarzschild calculated an exact solution to Einstein’s equations that showed how black holes could form.

Luckily, stars like the sun are too small to ever become black holes. But much more massive stars face that dark fate.

Stars shine by balancing the outward force of fusion energy generated in their cores with the inward crush of gravity. As long as a star’s core has enough raw material to support nuclear fusion, it exists in a stable state of “hydrostatic equilibrium.”

Earth’s sun converts about 600 million tons of hydrogen into helium every second and has been doing so for about five billion years. It has enough fuel to continue burning, scientists estimate, for another five billion years or so.

But it will eventually consume all of its fuel, and fusion will grind to a halt. And with nothing to offset the inward force of gravity, the star’s core will collapse. For smaller stars like the sun, the collapse is halted by quantum effects, producing a compact white dwarf star the size of a small planet that slowly cools over billions of years.

For more massive stars, with cores between about 1.4 and 3 times the mass of the sun, gravity overcomes even the quantum mechanical effects that produce white dwarfs. Core collapse continues to the point where electrons are forced inside atomic nuclei, merging with protons to form a neutron star. In the process, the original star is blown apart in a titanic supernova explosion.

Neutron stars are the densest bodies in the universe, cramming more than twice the mass of Earth’s sun into a body less than 10 miles across. 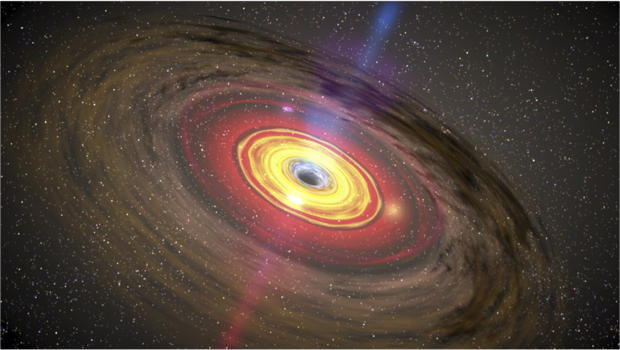 An artist’s impression of a black hole surrounded by an accretion disk of infalling material and high-energy jets extending from its poles. NASA/Goddard Space Flight Center

But black holes eclipse even neutron stars in mind-boggling fashion. For truly massive stars, enough gravity is available to overcome all known nuclear forces and core collapse proceeds to the point where it vanishes from the visible universe, leaving behind nothing but an enormously concentrated “gravity well” of deeply distorted space.

The black hole’s mass defines the size of its event horizon, the zone from which nothing, not even light, can escape. If a photon, dust particle — or a spaceship — crosses the event horizon, it is forever lost to the universe. Nothing can escape the gravitational clutches of a black hole.

By definition, black holes are invisible. But they can be detected by the radiation streaming away into space from gas and dust particles being sucked in. As such material approaches the event horizon, it is accelerated to enormous velocities and as the particles jostle together, heat – and high-energy radiation — is generated.

That radiation can be detected and analyzed to glean insights into the nature of the black hole causing it. For supermassive black holes like the one at the core of the Milky Way, gravitational effects on nearby stars and gas clouds also can be detected.

By monitoring the motions of stars very near Sgr A* and plugging the numbers into Newton’s equation of gravity, scientists concluded the only explanation was an unseen mass totaling more than four million times that of the sun.

Supermassive black holes actively consuming stars and other material in their immediate environment are known as quasars or, more generally, active galactic nuclei.