SIGNAL MOUNTAIN, Tennessee (WDEF)- Signal Mountain signed an ordinance on Monday that is an attempt to keep their residents and pets safe.

The city of Signal Mountain has introduced a new ordinance that will hopefully help cut down on vicious dog attacks.

Back in 2019, a small dog died after it was attacked by a larger dog.

Signal Mountain’s Chief of Police, Mike Williams says, “There were a couple times that this type thing was going on and they weren’t reporting it to us and we have no idea and once the small dog was killed we found out that there was several instances.” 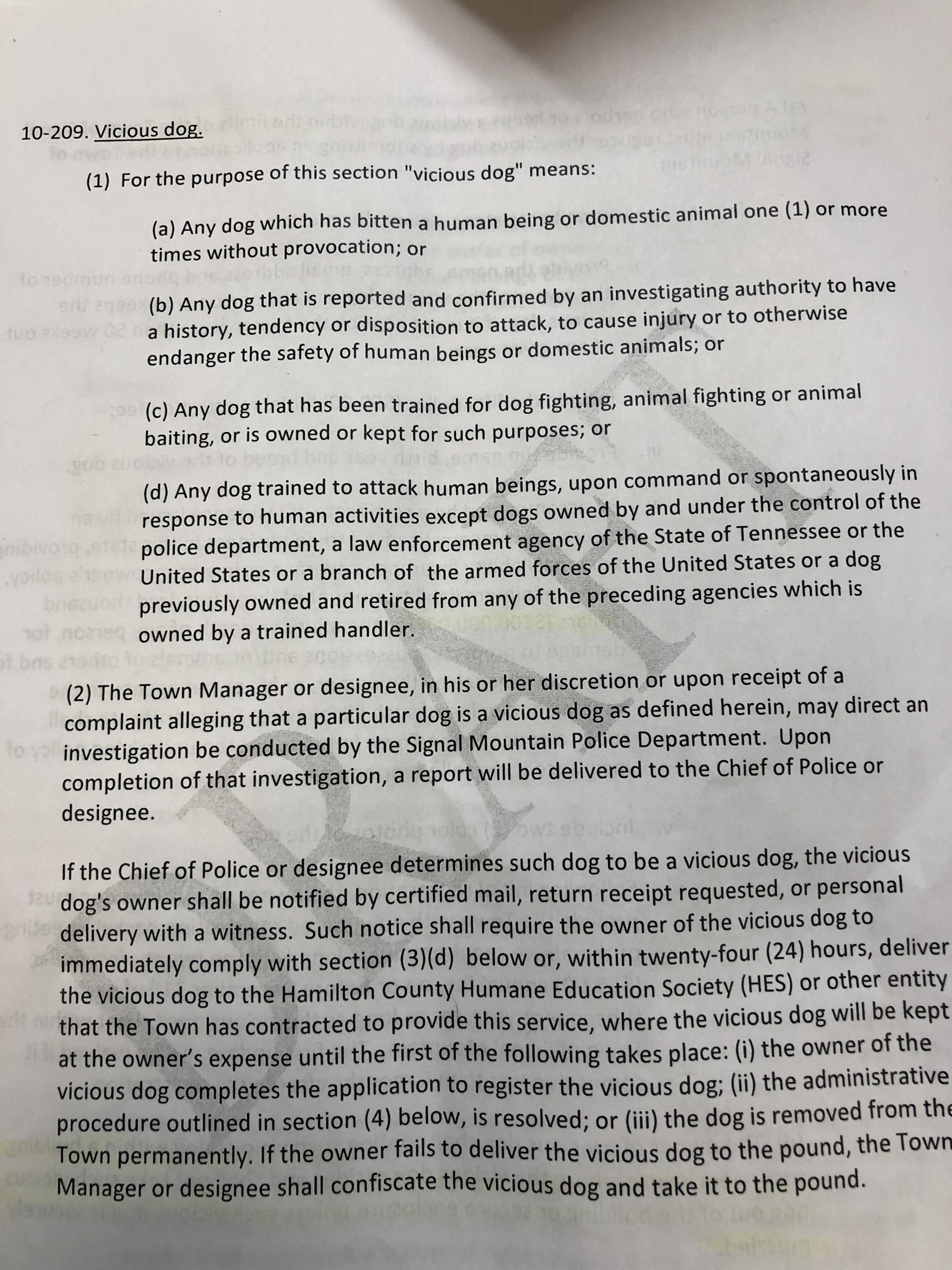 Some of the classifications for vicious dogs are:

“A. Any dog which has bitten a human being or domestic animal one (1) or more times without provocation; or

B. Any dog that is reported and confirmed by an investigating authority to have a history, tendency or disposition to attack, to cause injury or to otherwise endanger the safety of human beings or domestic animals; or

C. Any dog that has been trained for dog fighting, animal fighting or animal baiting, or is owned or kept for such purposes; or

D. Any dog trained to attack human beings, upon command or spontaneously in response to human activities except dogs owned by and under the control of the police department, a law enforcement agency of the State of Tennessee or the United States or a branch of the armed forces of the United States or a dog previously owned and retired from any of the preceding agencies which is owned by a trained handler.”

The director of the Humane Educational Society, Phil Synder, ” A lot times, dogs that have bitten somebody are categorized as potentially dangerous, dangerous and vicious. Vicious usually means that it is not a very good neighbor and it has probably caused some damage to people or other animals.”

Signal mountain resident, Tom Clarke, says, “I think it’s a good thing ya know. It’s going to protect our pets and citizens. It is also going to enforce the responsibility and accountability.It’s about compliance. It’ll be up to the people respecting the rules and regulations.”

The Humane Educational Society will be working with Signal Mountain Police to crack down on vicious dogs in the area.

Synder also says, “A lot of dogs don’t like other animals and a lot of dogs are going to be protective of their owners but they have to be kept under control and I think that is the main thing. We see a lot of bites that are very very serious and we take it serious and I’m sure that Signal Mountain does also.”

If your dog qualifies as vicious you must register your dog, place a visible warning sign in your yard and you must make sure that they are muzzled when they are in public.

If your dog is deemed vicious you have the following options:

“They can hand it over to the Humane Educational Society, if they choose to give up the animal.

If they choose to keep the animal, they have to submit an application to register the animal with the Town of Signal Mountain.” 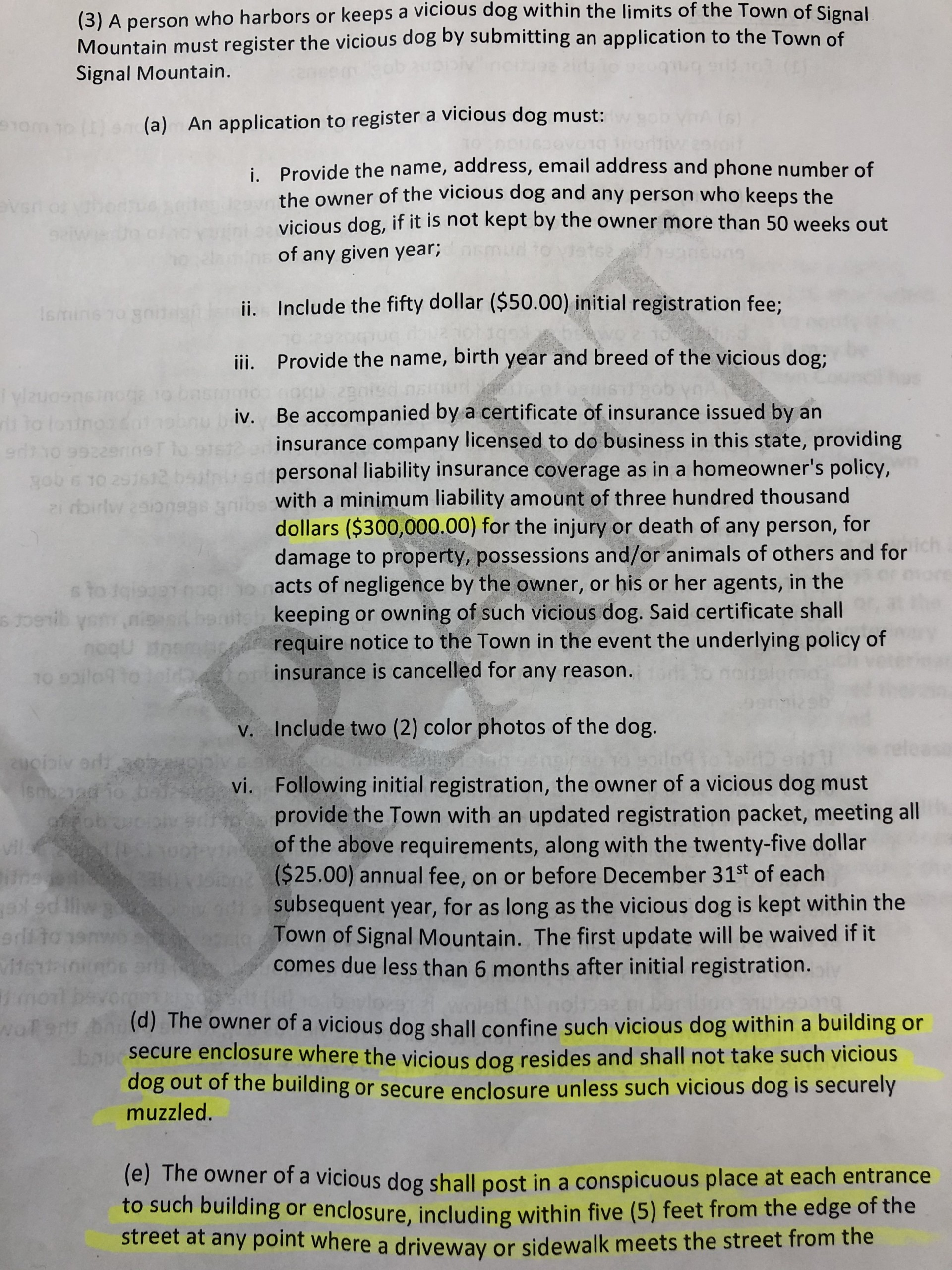 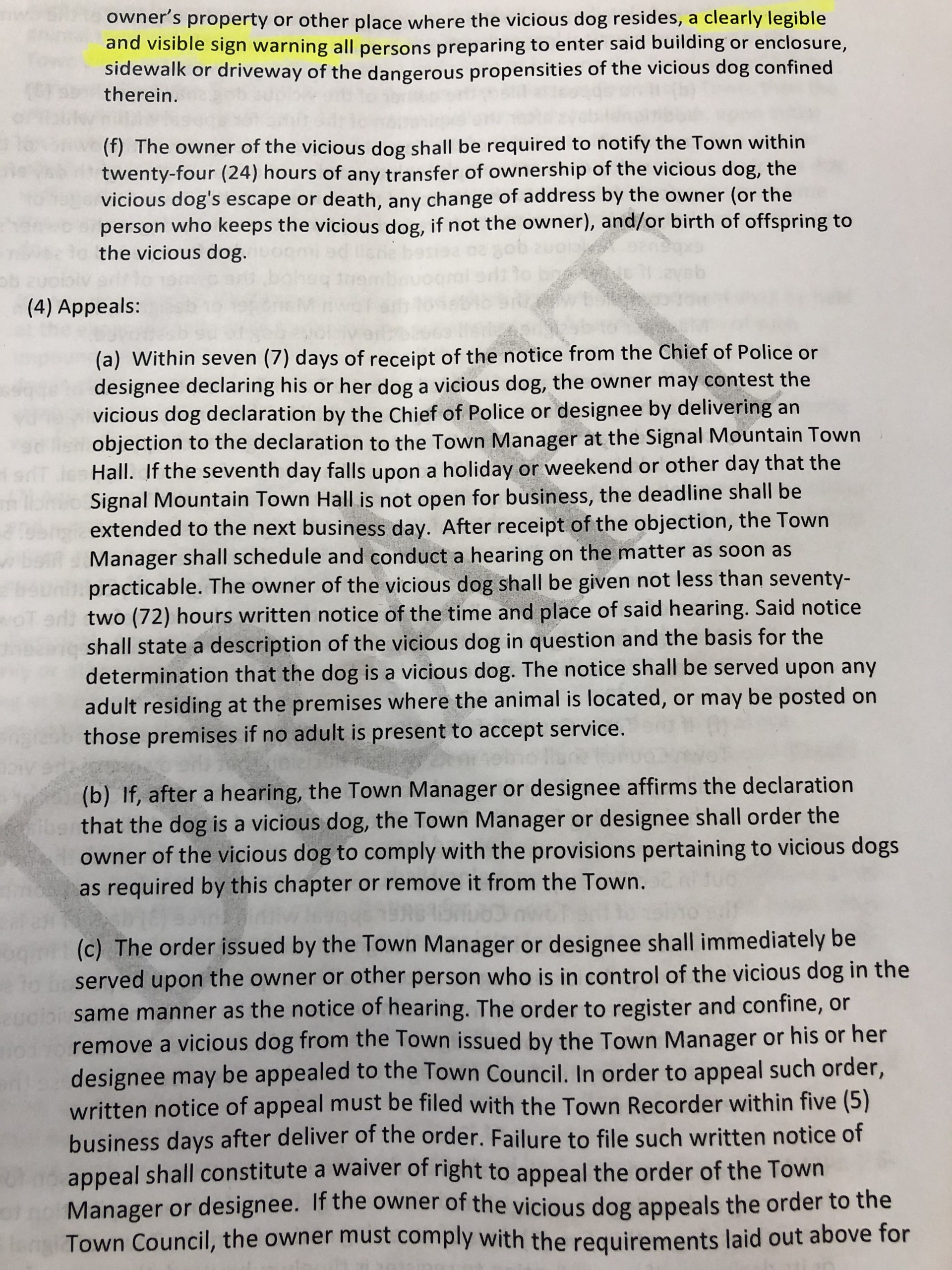