Singing the praises of karaoke

Back in his younger days, Daisuke Inoue (who’s now 78), was a musician who couldn’t read music. So, he came up with a truly inventive solution – which is to say Daisuke Inoue invented the karaoke machine.

“A regular jukebox is for listening; this would be a jukebox for singing,” he said.

He introduced his creation at bars across Japan in the early ’70s. Today, it’s estimated that one-third of the people in Japan sing karaoke.

Daisuke Inoue, a Japanese musician who couldn’t read music, invented a machine that would help teach the world to sing in perfect harmony. CBS News

“Usually in our lives we watch the stars through the media,” Inoue said. “All of us want to be stars ourselves. With a mic in your hand, YOU can be a star!”

Of course, karaoke (which translates as “empty orchestra”) is now a global phenomenon. And if you happen to live in Seattle, Washington, one of the biggest stars of karaoke is Joshua Baron, better known as the “Karaoke Baron.”

He’s not joking. Almost every night of the week, the Karaoke Baron is either performing or singing along. He told correspondent Nancy Giles it was karaoke that helped him get through cancer. “My doctor is like, ‘If anything, this is gonna help heal you. because it’s something that you love to do, it’s music,'” he said. 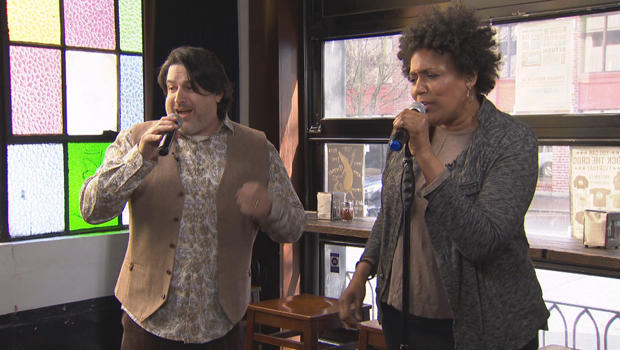 Good for living, and a pretty good living besides. In 2017, the karaoke bar industry made some $435 million, and that’s just in the United States.

So, you’d think that back in Osaka, Japan, Daisuke Inoue, inventor of karaoke, would be rolling in royalties. Not so. Turns out, Inoue never took out a patent. “No, I have no regrets,” he said. “If I had patented karaoke, it never would have taken off the way it did.”

Josh Baron said, “He never really did it for the money. He wanted people to have that enjoyment of singing with their favorite songs.”

And his contribution to the music world hasn’t gone unsung! A while back, he was recognized with a Harvard University Ig-Nobel Prize. (It’s sort of a parody of a real Nobel Prize.)

And it brought Inoue to America, to see firsthand how his invention helped “teach the world to sing in perfect harmony.”

The bloodsport of singing karaoke