Two were killed, along with a police dog 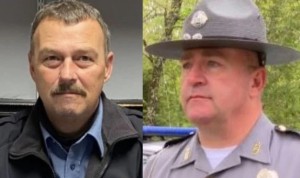 Two officers were killed, along with a K9.

The shooting and standoff happened in the eastern Kentucky mountains in the small town of Allen.

The incident began when four officers arrived at a home to serve a domestic violence warrant.

The Sheriff says 49 year old  Lance Storz opened fire on them without warning.

They called for backup and a variety of agencies responded.

Storz was barricaded in the home.

After hours of negotiation, he finally gave himself up.

In addition to the fatalities, four other officers were shot, including the one in critical condition today.