Five months after a frightening launch abort, cosmonaut Alexey Ovchinin and NASA flight engineer Tyler “Nick” Hague, along with first time flier Christina Koch, are set for liftoff Thursday on a six-hour flight to the International Space Station, boosting the lab’s crew back to six.

With Ovchinin strapped into the command module’s center seat, flanked on the left by Hague and on the right by Koch, the Soyuz MS-12/58S spacecraft is scheduled for launch from the Baikonur Cosmodrome in Kazakhstan at 3:14 p.m. EDT Thursday (12:14 a.m. Friday local time), kicking off an eight-minute 45-second climb to orbit.

If all goes well, the spacecraft will catch up with the station four orbits later, moving in for an automated docking at the Earth-facing Rassvet module around 9:07 p.m.

Ovchinin and Hague took off aboard the Soyuz MS-10/56S spacecraft on Oct. 11. But two minutes after liftoff, one of the rocket’s four strap-on boosters failed to separate cleanly, triggering a catastrophic failure. The Soyuz spacecraft’s abort system immediately kicked in, propelling the crew ship to safety for a parachute descent to Earth.

The Soyuz MS-12/58S spacecraft on the pad awaiting launch Thursday at the Baikonur Cosmodrome in Kazakhstan. NASA

Speaking with CBS News by satellite from Moscow last month, Hague said he continued to have full confidence in the safety and reliability of the Soyuz.

“I’m 100 percent confident,” he said. “In the aftermath of the launch abort, watching the response from the Russians, the transparency and the way they approach that in terms of sharing their data and resolving the issues, it was impressive. The strength of the international cooperation was tested, and it’s as strong as it’s ever been.”

That doesn’t necessarily make it any easier for Hague’s wife and two children. All three were on hand at Baikonur for the launch abort.

“But I am lucky, I’ve got an amazing wife, I’ve got amazing children, and I’ve been impressed by their resilience. They understand the importance of what we’re doing, and why we need to keep the mission going. The space program, we’ve had failures and successes, and we learn as we go. But the important thing is we continue moving forward.”

His wife Catie told CBS News earlier: “I’m nervous. Oh yes. … Every little piece has to work perfectly, and it’s scary to be the spouse and to watch it from the outside, (it’s) very scary. But I agree with what Nick said. I mean, this is an important mission. And I go back to that to help calm my nerves.”

Even so, she added, “will I be terrified while I’m watching it? Yes, I will be terrified.” 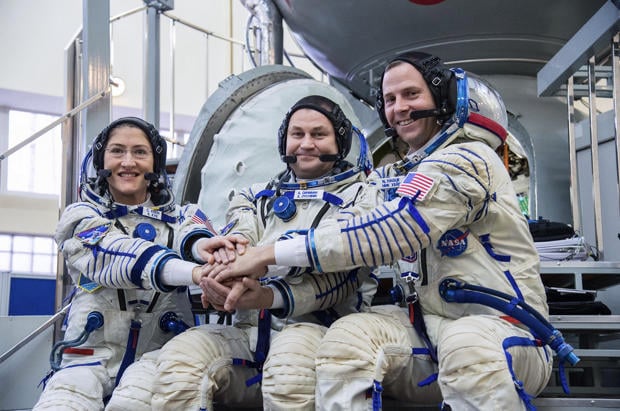 The launch abort threw a wrench into the carefully planned space station crew rotation schedule. Kononenko, Saint-Jacques and McClain have had the station to themselves since three other station fliers returned to Earth Dec. 19.

The Soyuz MS-12/58S spacecraft originally was expected to launch in April with commander Oleg Skripochka, a United Arab Emirates guest cosmonaut and Koch, who was in training as the flight’s board engineer, or co-pilot. But in the wake of the abort, the flight was moved up and Ovchinin and Hague were assigned to join Koch with Hague taking over co-pilot role.

Koch, an electrical engineer, rock climber and veteran Antarctic researcher, was selected for the astronaut corps in 2013 in the same class with Hague. She said Ovchinin and Hague went out of their way to welcome her aboard.

She described Ovchinin as “wonderful,” saying he “welcomed me very graciously into the crew. He from day one has looked for ways to incorporate my skills and knowledge, he has made sure I feel like a full-fledged member of the crew.

“We’ve trained both in the Soyuz and on the Russian segment of the space station, so we’ve had plenty of opportunities to learn how each other work and we have a great relationship. I’m privileged to fly with him. He’s proven himself many times before as a great space flier.”

As for the safety and reliability of the Soyuz, Koch echoed Hague and said she had no qualms or concerns.

“For a few months, before the flight changes after Nick and Alexey’s launch abort, I was actually training as a co-pilot of the Soyuz,” she said. “So I was privileged enough to learn not only about its life support systems, but kind of get into the details of the engineering of a lot of the motion control and other parts of the spacecraft.

“It’s an incredible machine. The fact that it’s reliability is so high is something to hold in really high regard, and it’s been a huge privilege to train on a spacecraft that has such an excellent record. It’s been an honor. It’s a good spacecraft.” 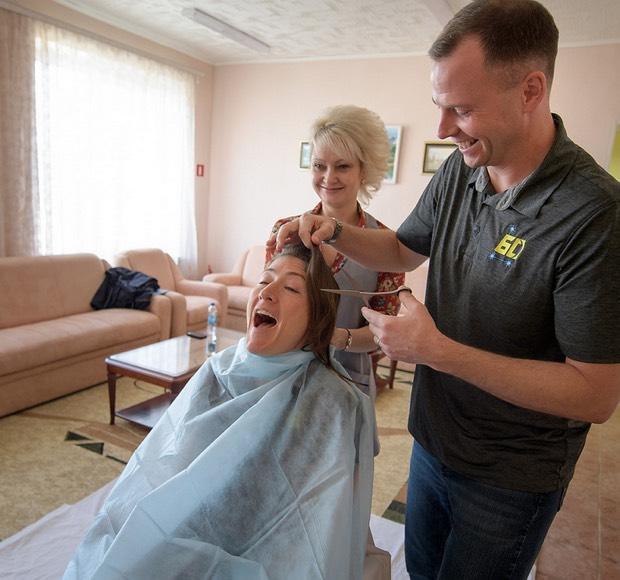 Nick Hague jokes with crewmate Christina Koch while learning how to give each other haircuts once aboard the space station. NASA

Kononenko, Saint-Jacques and McClain are expected to return to Earth on June 25 to wrap up a 203-day mission. Ovchinin, Hague and Koch will have the station to themselves until July 6 when three fresh crew members will arrive: Soyuz MS-13/59S commander Alexander Skvortsov, NASA astronaut Drew Morgan and Italian Luca Parmitano, a veteran European Space Agency astronaut.

That flight had been the last mission contracted to carry U.S. astronauts as NASA transitions to commercial crew ships being built by SpaceX and Boeing. SpaceX launched its Crew Dragon spacecraft on an unpiloted test flight March 2 and may be ready to launch the first astronauts in the mid summer timeframe.

Boeing’s CST-100 Starliner capsule is being prepared for an unpiloted test flight this spring, followed by an initial crewed mission in the fall. Once one or both spacecraft are
declared operational, NASA will be able to end its sole reliance on the Soyuz to ferry U.S. and partner astronauts to and from the station.

But that certification will require the resolution of numerous technical issues as well as critical tests of each spacecraft’s abort systems. Hedging their bets, NASA managers are in the process of purchasing two additional Soyuz seats, one for use this fall and the other next spring. That will ensure a U.S. presence on the station through 2020 even if the Commercial Crew Program encounters major delays.

In the meantime, the expanded station crew will face a busy first few weeks together. Hague and McClain plan to carry out a spacewalk March 22 to install new solar array batteries, a task that will be completed by McClain and Koch during a second spacewalk seven days later. Hague and Saint-Jacques will conduct a third EVA on April 8 to carry out maintenance and other upgrades.

Cosmonaut Svetlana Savitskaya was the first woman to walk in space in 1984. Eleven American women followed in her footsteps. McClain and Koch will be the thirteenth and fourteenth to float outside a spacecraft and the first all-female spacewalk team.