SpaceX readied a triple-core Falcon Heavy rocket for the booster’s first nighttime launch Monday in what promises to be a spectacular climb to space. The launch kicks off a complex $750 million mission to deploy 24 small science and technology testbed satellites into multiple orbits for the Pentagon, NASA and a variety of other agencies.

In so doing, the third flight of the Falcon Heavy, along with the attempted recovery of all three first stage core boosters — two back at Cape Canaveral and one on an off-shore droneship — will help certify the powerful rocket for launching expensive high-priority national security payloads, a major milestone for SpaceX.

A Falcon Heavy rocket was erected atop pad 39A at the Kennedy Space Center early Monday for launch on a complex mission to deploy 24 satellites for the Pentagon, NASA, the National Oceanic and Atmospheric Administration and a variety of other government, civilian and international agencies. The two side boosters previously flew in April. SpaceX

Managed by the Air Force Space and Missile Systems Center, the Space Test Program 2 — STP-2 — launch from historic pad 39A at the Kennedy Space Center is targeted for 11:30 p.m. EDT Monday. Forecasters predicted an 80 percent chance of acceptable weather.

Liftoff will come, coincidentally, just 42 minutes after the planned landing of a Russian Soyuz spacecraft in Kazakhstan carrying three crew members back to Earth after a six-and-a-half-month stay aboard the International Space Station. NASA planned to provide television coverage of both missions on its satellite TV network.

“STP-2 is the government’s first launch on a SpaceX Falcon Heavy vehicle, and is one of the most challenging missions the Space and Missile Systems Center has ever launched,” said Col. Robert Bongiovi, director of the Air Force Launch Enterprise Systems Directorate.

“We’re putting 24 research and development satellites into three separate orbits, with a first-ever four engine start and burn of the second stage.”

Stacked in a dispenser inside the Falcon Heavy’s nose fairing, the payloads include an ultra-accurate atomic clock that NASA is testing to improve deep space navigation; six satellites sponsored by the National Oceanic and Atmospheric Administration and Taiwan that will help improve tropical weather forecasting; and experimental propulsion technology provided by NASA that uses less-toxic but more powerful “green” propellants.

Other payloads, several built by students, will study how Earth’s magnetic field and charged particles in the near-space environment affect sensitive electronics and communications. Twelve small “Cubesats” are on board, including one provided by the Planetary Society to test solar sail technology, using the pressure of sunlight for propulsion.

Packed into a three-unit Cubesat the size of a loaf of bread, the solar sail will unfurl to the size of a boxing ring and, if all goes well, catch enough sunlight to climb up to three tenths of a mile per day without the use of traditional thrusters and propellant. 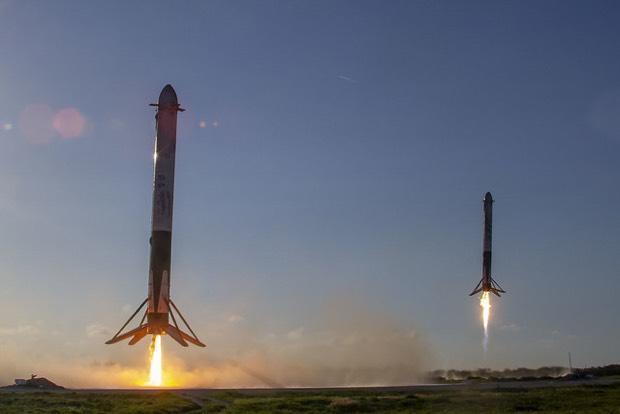 The two Falcon Heavy side boosters seen landing here in April after helping launch a communications satellite will be used to launch SpaceX’s third Heavy Monday night. They will attempt another return to the Cape Canaveral Air Force Station. SpaceX

“It’s really a romantic notion that has tremendous practical applications,” said Bill “The Science Guy” Nye, CEO of the Planetary Society. “We share the technology with the world, and we are very excited about this launch because we’re going to get to a high enough altitude … that we’re really going to be able to build orbital energy and take some, I hope, inspiring pictures.”

Also on board for the STP-2 mission: small portions of the cremated remains of 152 space enthusiasts being sent into orbit by their families through Celestis Memorial Spaceflights, a company that provides launch opportunities for clients who opt for burials in space and what the firm’s website describes as “a uniquely compelling memorial experience.”

An eye-catching spectacle in daylight, the nighttime launch and landings promise an even more dramatic show.

“Having been down there for a couple, the recoveries back on land, they do end up being a spectacular sight coming back to the landing zone,” said Walter Lauderdale, the STP-2 mission director. “It should be an exciting opportunity.”

The central core booster, making its first flight, will fire longer than its two sidekicks and will not have enough left-over propellant to make it back to Florida. Instead, it will attempt to land on the SpaceX droneship “Of Course I Still Love You” stationed a record 770 miles east of Cape Canaveral.

It will be the first night launch and landing for the Falcon Heavy, the first use of the Heavy by the Air Force and its first use of previously flown booster hardware.

Bongiovi said the use of previously flown boosters “is providing critical insight into reusability and quality assurance that will allow us to provide space access to the warfighter in a more cost-effective and expedient manner. I really appreciate the efforts of our industry partner (SpaceX) to make this happen.” 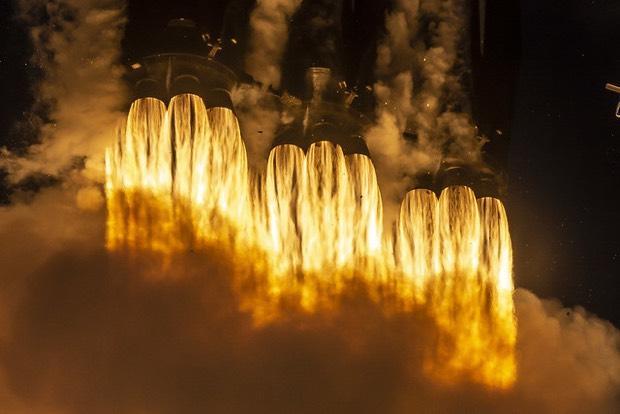 A closeup of the 27 Falcon Heavy first stage engines firing during the early moments of launch in April. The two side boosters were recovered and will make their second flight helping launch the STP-2 multi-satellite payload. SpaceX

The mission is especially complex because the satellites are bound for three different orbits, requiring multiple firings of the Falcon’s single second stage Merlin engine.

In an initially elliptical orbit measuring about 186 by 534 miles, the dispenser will release a satellite known as Oculus 13 minutes after launch. Built by students at the Michigan Technological University, Oculus will serve as a target to test techniques for studying satellites from the ground. Eleven Cubesats will be deployed from the dispenser between 19 and 50 minutes after takeoff.

The second stage then will fire again to circularize the orbit at an altitude of about 447 miles before deploying General Atomics’ Orbital Test Bed satellite, housing NASA’s atomic clock and the Celestis cremains, the green propellant experiment, a Naval Research Laboratory space weather monitor and the six satellites making up NOAA’s COSMIC 2 payload.

The second stage will fire twice more to achieve an orbit with a high point of around 7,455 miles and a low point of about 3,700, in the process changing the tilt of the orbit with respect to the equator. At that point, the Air Force’s Demonstration and Science Experiments — DSX — satellite will be deployed to characterize the space radiation environment and its effects on sensitive electronics.

“On the scale of complexity of launches that we do in the National Security Space Launch program, this is on the complex edge,” said Bongiovi. “We’re going to see a lot more multi-mission, a lot more of the multiple drop-offs, those kind of things, so it’s actually really good that we have such a complex mission on this experimental launch.”