Space station astronauts closed hatches to the SpaceX Crew Dragon spacecraft Thursday, setting the stage for undocking early Friday and a fiery unpiloted plunge to splashdown off the coast of Florida. A successful return to Earth will help clear the way for launch of the first piloted test flight of the new ferry ship in the mid-summer timeframe.

It’s “a very significant step that marks opening up of low-Earth orbit to commercial companies, not only to (carry) NASA (astronauts) but perhaps other customers,” station astronaut Anne McClain told CBS News in an interview from space on Thursday. “This is a model where NASA is one customer of many, and so I think the possibilities are endless … for science, research and commercial companies.”

The Crew Dragon and Boeing’s CST-100 Starliner — expected to make its initial unpiloted test flight in late April or May — are the first new human-rated, orbit-class spaceships built anywhere in the world since NASA’s space shuttle made its debut nearly 40 years ago.

Assuming the unpiloted Crew Dragon successfully completes its mission Friday, and assuming subsequent tests and required modifications go well, the first piloted flight of the spacecraft, a mission known as Demo 2, could be ready for launch in July.

Canadian astronaut David Saint-Jacques floats out of SpaceX’s Crew Dragon spacecraft after making sure the ship was ready for hatch closing. At left, an instrumented astronaut test dummy nicknamed Ripley is strapped in for the trip back to Earth Friday morning. NASA

NASA has spent about $8 billion to date funding development of the SpaceX and Boeing commercial crew ships in a bid to end the agency’s sole reliance on Russian Soyuz spacecraft to carry astronauts to and from the space station in the wake of the space shuttle’s retirement in 2011.

Running more than two years behind schedule because of funding shortfalls and technical issues, the SpaceX Crew Dragon finally was launched atop a Falcon 9 rocket on Saturday. After a flawless 27-hour rendezvous, the spacecraft caught up with the station the next day and glided in for a picture-perfect docking Sunday morning.

The station’s three crew members — McClain, commander Oleg Kononenko and Canadian astronaut David Saint-Jacques — opened hatches and floated inside the new spacecraft for initial inspections and to haul out about 400 pounds of crew supplies.

“Crew Dragon, it was a beautiful moment to see it approach,” Saint-Jacques said Thursday. “It was a moving moment to see the opening of a new chapter where we have this new possibility, a new tool in our quiver for space exploration.”

For the trip back to Earth, the Crew Dragon will carry about 300 pounds of cargo, including a failed spacesuit component and two cold bags loaded with experiment samples. The capsule’s hatch was closed at 12:39 p.m. Thursday.

With an instrumented astronaut test dummy strapped into one of the Crew Dragon’s four seats, the flight plan called for the capsule to undock from the station’s forward port at 2:31 a.m. Friday as the two spacecraft sail 253 miles above North Africa.

Forty minutes later, the crew ship will have moved about four miles from the lab, heading to a designated point in space where it will fire its braking thrusters to drop out of orbit. First, though, it will jettison its empty trunk section, an unpressurized cargo compartment behind the crew capsule.

Then, a few seconds before 7:53 a.m., the Crew Dragon’s braking rockets will fire up for a planned 15-minute, 25-second burn, slowing the ship and dropping the far side of its orbit into the atmosphere. A half hour later, around 8:33 a.m., the spacecraft will plunge back into the discernible atmosphere.

The Crew Dragon will descend along a northwest-to-southeast trajectory across the eastern United States. NASA routinely provided maps during shuttle missions showing the orbiter’s path and what populated areas it would pass over during entry, but SpaceX did not release any such details about the Crew Dragon’s trajectory.

Company founder Elon Musk said during a post-launch news conference last Saturday that the capsule’s hypersonic entry posed at least some concern on his part because the spacecraft’s shape is not as symmetrical as the version used to carry cargo to the station. 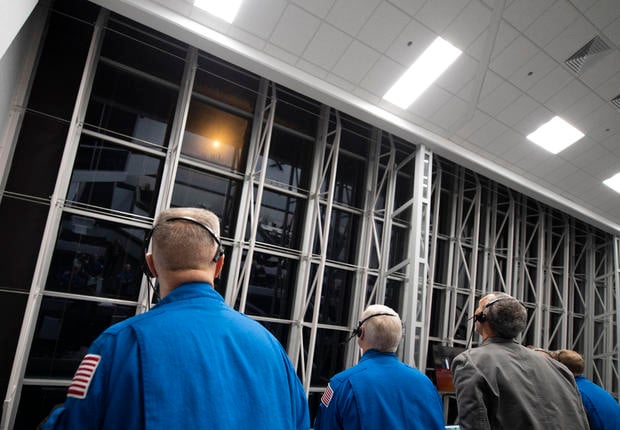 “The backshell is not symmetric in the way Dragon 1 is, it’s not sort of a smooth conic like Dragon 1 is. You’ve got the launch escape thruster pods that could potentially cause a roll instability on re-entry,” he said. “I think it’s unlikely. We’ve run simulations a thousand times, but this is a possibility.”

If all goes well, drogue chutes will slow the ship after it descends into the thick lower atmosphere, its four main parachutes will unfurl and inflate around 8:42 a.m. and the Crew Dragon will drop to a gentle splashdown at 8:45 a.m.

SpaceX recovery crews and NASA observers will be stationed nearby on a recovery ship named GO Searcher and a support ship, the GO Navigator. The GO Searcher’s crew will haul the spacecraft aboard and return it to Port Canaveral where it will be offloaded for detailed post-flight inspections.

“To me, it’s really a bit of a dress rehearsal for the Demo 2 mission,” said Steve Stich, a veteran flight director and deputy manager of NASA’s Commercial Crew Program. “I think we’ll learn a lot of subtle things about the spacecraft, how it does thermally, how the GNC (guidance, navigation and control) system works.”